Feeding Systems for Goats and Qualitative Assessment of Feedstuffs Accessible During the Dry Season: Two Case Studies from the Mexican Highlands 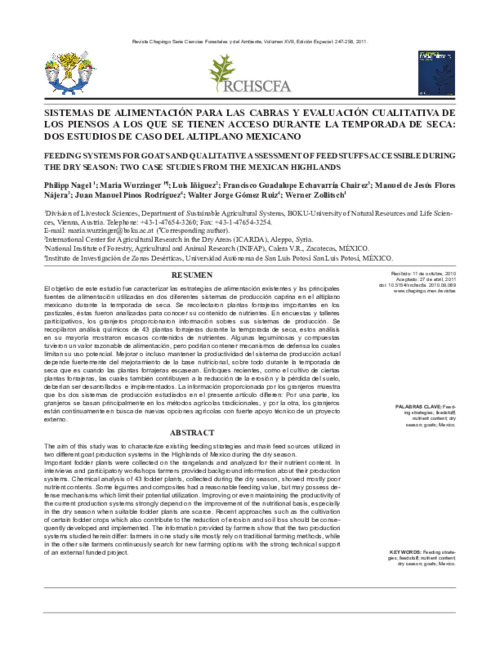 The aim of this study was to characterize existing feeding strategies and main feed sources utilized in two different goat production systems in the Highlands of Mexico during the dry season. Important fodder plants were collected on the rangelands and analyzed for their nutrient content. In interviews and participatory workshops farmers provided background information about their production systems. Chemical analysis of 43 fodder plants, collected during the dry season, showed mostly poor nutrient contents. Some legumes and composites had a reasonable feeding value, but may possess defense mechanisms which limit their potential utilization. Improving or even maintaining the productivity of the current production systems strongly depend on the improvement of the nutritional basis, especially in the dry season when suitable fodder plants are scarce. Recent approaches such as the cultivation of certain fodder crops which also contribute to the reduction of erosion and soil loss should be consequently developed and implemented. The information provided by farmers show that the two production systems studied herein differ: farmers in one study site mostly rely on traditional farming methods, while in the other site farmers continuously search for new farming options with the strong technical support of an external funded project.