The Goat and Goat Production Systems of Small-Scale Producers of the Comarca Lagunera, in Northern Mexico 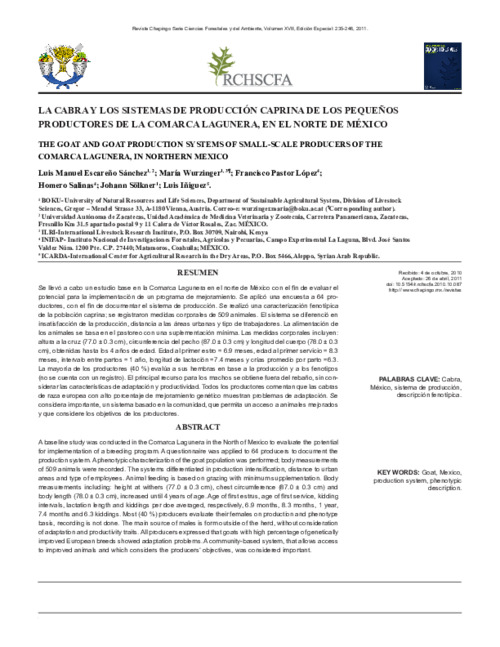 A baseline study was conducted in the Comarca Lagunera in the North of Mexico to evaluate the potential for implementation of a breeding program. A questionnaire was applied to 64 producers to document the production system. A phenotypic characterization of the goat population was performed; body measurements of 509 animals were recorded. The systems differentiated in production intensification, distance to urban areas and type of employees. Animal feeding is based on grazing with minimum supplementation. Body measurements including: height at withers (77.0 ± 0.3 cm), chest circumference (87.0 ± 0.3 cm) and body length (78.0 ± 0.3 cm), increased until 4 years of age. Age of first estrus, age of first service, kidding intervals, lactation length and kiddings per doe averaged, respectively, 6.9 months, 8.3 months, 1 year, 7.4 months and 6.3 kiddings. Most (40 %) producers evaluate their females on production and phenotype basis, recording is not done. The main source of males is form outside of the herd, without consideration of adaptation and productivity traits. All producers expressed that goats with high percentage of genetically improved European breeds showed adaptation problems. A community-based system, that allows access to improved animals and which considers the producers’ objectives, was considered important.