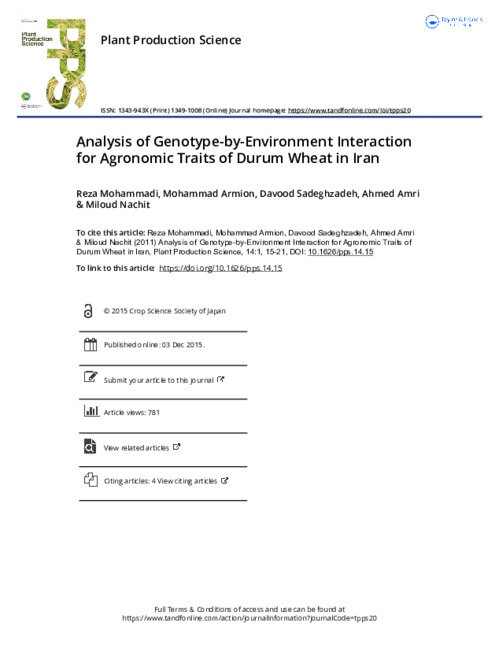 Grain yield of durum wheat (Triticum turgidum L. var. durum) under Mediterranean conditions is frequently limited by both high temperature and drought during grain filling. Genotype-by-environment (GE) interaction and genotype-by-trait (GT) data were analyzed for agronomic performance of durum wheat breeding lines. Data were obtained from 18 durum wheat breeding lines and two cultivar checks (Zardak and Sardari) for their agronomic performance under three different climate locations (moderate, warm and cold winters) and two moisture regimes (rainfed and two supplemental irrigations conditions) in two cropping seasons (2006 and 2007) in Iran. Analysis of GE interaction data based on multiple traits showed that the environment (combination of year-location-moisture regimes) effect was always the most important source of trait variation, accounting for 58.6 to 98.4% of the total variation. Biplot analysis of the studied traits revealed that (i) the locations tended to discriminate genotypes in dissimilar fashions, and (ii) the relationships among traits were not consistent over the locations, where they facilitated visual genotype comparisons and selection at each location.