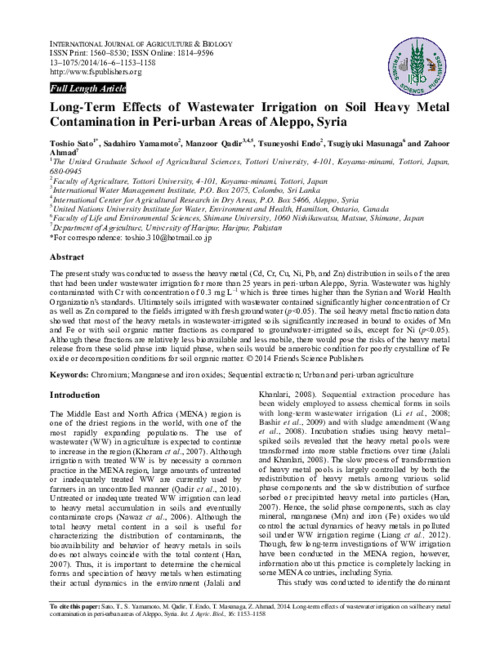 The present study was conducted to assess the heavy metal (Cd, Cr, Cu, Ni, Pb, and Zn) distribution in soils of the area that had been under wastewater irrigation for more than 25 years in peri-urban Aleppo, Syria. Wastewater was highly contaminated with Cr with concentration of 0.3 mg L-1 which is three times higher than the Syrian and World Health Organization's standards. Ultimately soils irrigated with wastewater contained significantly higher concentration of Cr as well as Zn compared to the fields irrigated with fresh groundwater (p<0.05). The soil heavy metal fractionation data showed that most of the heavy metals in wastewater-irrigated soils significantly increased in bound to oxides of Mn and Fe or with soil organic matter fractions as compared to groundwater-irrigated soils, except for Ni (p<0.05). Although these fractions are relatively less bioavailable and less mobile, there would pose the risks of the heavy metal release from these solid phase into liquid phase, when soils would be anaerobic condition for poorly crystalline of Fe oxide or decomposition conditions for soil organic matter. (C) 2014 Friends Science Publishers