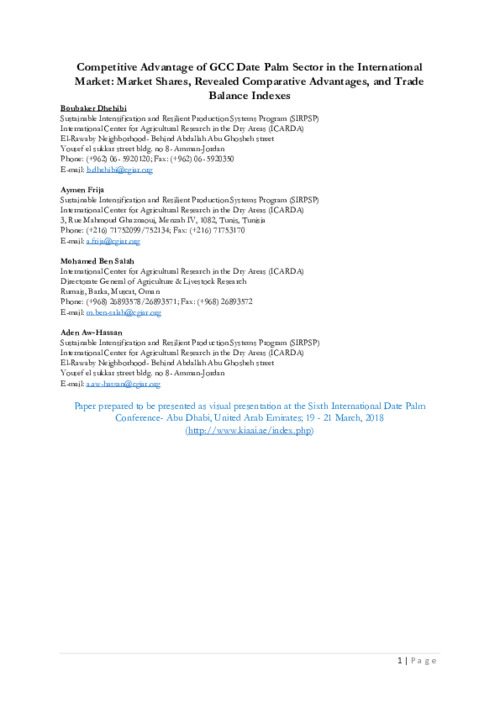 In the GCC countries, date-palm sector is strategically important for the economic, social and environmental development. Therefore, markets globalization has had a huge impact on the comparative advantages of date exports from the GCC countries, highlighting a new range of necessary determinants for competitiveness of these countries on the international market of date. The current study is conducted in the framework of the “Development of sustainable date palm production systems in the GCC countries of the Arabian Peninsula”; project funded by the Gulf Cooperation Council (GCC) and led by the International Center for Agricultural Research in the Dry Areas (ICARDA), and aims to provide updated estimates of competitiveness indicators of the GCC countries on the international market of dates palm. The study starts by a summary description of updated figures concerning date’s production, yields, consumption trends and patterns of the different GCC countries. This first descriptive part of the paper also include a presentation of the date trade matrix (destinations of exports and imports) of the considered countries. In a second part of this section, a set of competitiveness indicators were calculated to better reflect on the date trade balances performances of each of the GCC countries. The measures of competitiveness conducted in this paper include: i) the Market Share (MS); ii) the Revealed Comparative Advantage (RCA); and iii) the Trade balance Index (TBI). The Market share indicator was used to identify size advantages and the degree of specialization of a given country on the international market of a given commodity. The RCA has been defined as a measure of performance of international trade competitiveness of a given country for a given commodity. And finally, the TBI is used to analyze whether a country has specialization in export (as net-exporter) or in import (as net-importer) for a specific group of products. Data from both FAOSTAT and UN COMTRADE sources was used for the calculation of these indicators. Empirical findings shown that GCC and North African countries are holding more than 70% of the international market of dates. The sum of market shares of the 6 GCC countries was about 30% of the international date market during 2015. This is showing that these countries together have strong potential for dominating the international date market. In terms of growth, it was clear that all GCC countries, including the least present on the international market are progressing quite positively with increasing shares from one year to another. In terms of RCA, the highest RCA value was recorded for Saudi Arabia. The RCA index of Saudi Arabia was about 43.5 in 2013, indicating that the country date export share for 2013 is 43.5% higher than its share in total world export of agricultural goods. Finally, TBI results show the existence of structural differences between Saudi Arabia and UAE in terms of dates export and import patterns. These two countries are both the main players in date export in the CC area. However, even though UAE is a net exporter of dates, its TBI is much lower than the TBI of Saudi Arabia, showing that UAE is also importing a higher proportion of its exported dates compared to Saudi Arabia. The date trade patterns among the GCC countries shows that there is a wide scope of coordination between the different trade strategies of these countries, through specialization and division of tasks. This can generate important opportunities for gaining more weight on the world market of dates.