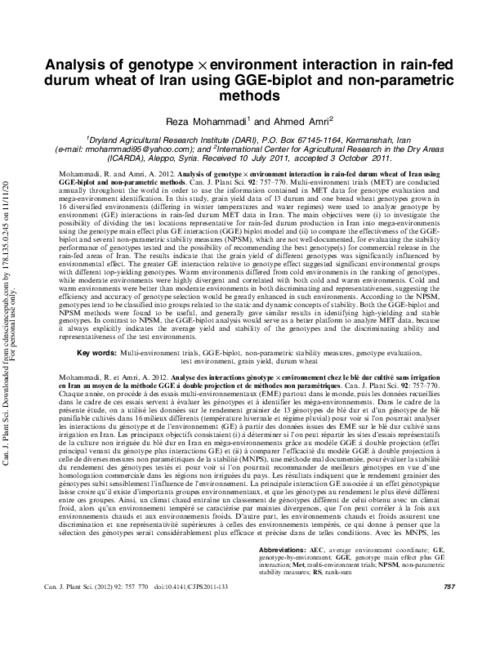 Mohammadi, R. and Amri, A. 2012. Analysis of genotype x environment interaction in rain-fed durum wheat of Iran using GGE-biplot and non-parametric methods. Can. J. Plant Sci. 92: 757-770. Multi-environment trials (MET) are conducted annually throughout the world in order to use the information contained in MET data for genotype evaluation and mega-environment identification. In this study, grain yield data of 13 durum and one bread wheat genotypes grown in 16 diversified environments (differing in winter temperatures and water regimes) were used to analyze genotype by environment (GE) interactions in rain-fed durum MET data in Iran. The main objectives were (i) to investigate the possibility of dividing the test locations representative for rain-fed durum production in Iran into mega-environments using the genotype main effect plus GE interaction (GGE) biplot model and (ii) to compare the effectiveness of the GGE-biplot and several non-parametric stability measures (NPSM), which are not well-documented, for evaluating the stability performance of genotypes tested and the possibility of recommending the best genotype(s) for commercial release in the rain-fed areas of Iran. The results indicate that the grain yield of different genotypes was significantly influenced by environmental effect. The greater GE interaction relative to genotype effect suggested significant environmental groups with different top-yielding genotypes. Warm environments differed from cold environments in the ranking of genotypes, while moderate environments were highly divergent and correlated with both cold and warm environments. Cold and warm environments were better than moderate environments in both discriminating and representativeness, suggesting the efficiency and accuracy of genotype selection would be greatly enhanced in such environments. According to the NPSM, genotypes tend to be classified into groups related to the static and dynamic concepts of stability. Both the GGE-biplot and NPSM methods were found to be useful, and generally gave similar results in identifying high-yielding and stable genotypes. In contrast to NPSM, the GGE-biplot analysis would serve as a better platform to analyze MET data, because it always explicitly indicates the average yield and stability of the genotypes and the discriminating ability and representativeness of the test environments.