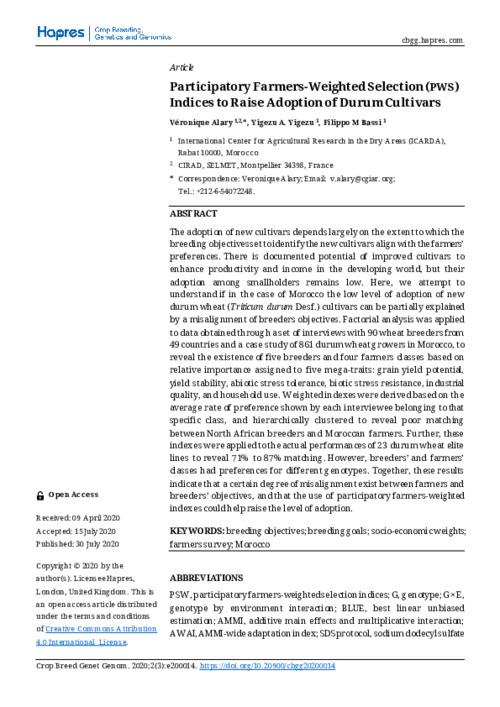 The adoption of new cultivars depends largely on the extent to which the breeding objectives set to identify the new cultivars align with the farmers’ preferences. There is documented potential of improved cultivars to enhance productivity and income in the developing world, but their adoption among smallholders remains low. Here, we attempt to understand if in the case of Morocco the low level of adoption of new durum wheat (Triticum durum Desf.) cultivars can be partially explained by a misalignment of breeders objectives. Factorial analysis was applied to data obtained through a set of interviews with 90 wheat breeders from 49 countries and a case study of 861 durum wheat growers in Morocco, to reveal the existence of five breeders and four farmers classes based on relative importance assigned to five mega-traits: grain yield potential, yield stability, abiotic stress tolerance, biotic stress resistance, industrial quality, and household use. Weighted indexes were derived based on the average rate of preference shown by each interviewee belonging to that specific class, and hierarchically clustered to reveal poor matching between North African breeders and Moroccan farmers. Further, these indexes were applied to the actual performances of 23 durum wheat elite lines to reveal 71% to 87% matching. However, breeders’ and farmers’ classes had preferences for different genotypes. Together, these results indicate that a certain degree of misalignment exist between farmers and breeders’ objectives, and that the use of participatory farmers-weighted indexes could help raise the level of adoption.