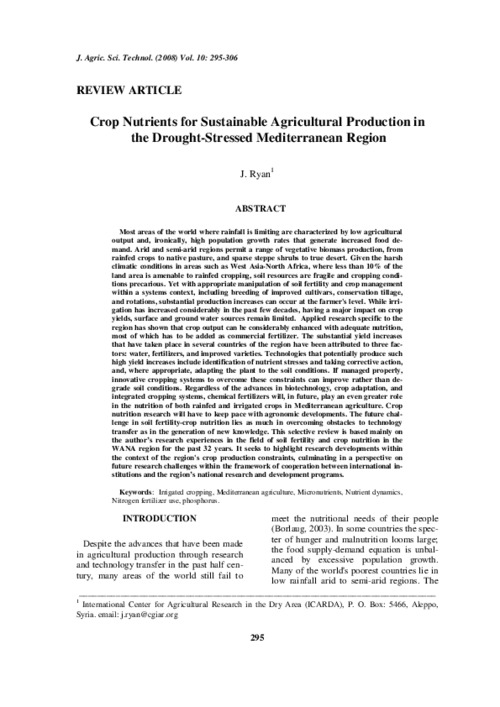 Most areas of the world where rainfall is limiting are characterized by low agricultural output and, ironically, high population growth rates that generate increased food demand. Arid and semi-arid regions permit a range of vegetative biomass production, from rainfed crops to native pasture, and sparse steppe shrubs to true desert. Given the harsh climatic conditions in areas such as West Asia-North Africa, where less than 10% of the land area is amenable to rainfed cropping, soil resources are fragile and cropping conditions precarious. Yet with appropriate manipulation of soil fertility and crop management within a systems context, including breeding of improved cultivars, conservation tillage, and rotations, substantial production increases can occur at the farmer's level. While irrigation has increased considerably in the past few decades, having a major impact on crop yields, surface and ground water sources remain limited. Applied research specific to the region has shown that crop output can be considerably enhanced with adequate nutrition, most of which has to be added as commercial fertilizer. The substantial yield increases that have taken place in several countries of the region have been attributed to three factors: water, fertilizers, and improved varieties. Technologies that potentially produce such high yield increases include identification of nutrient stresses and taking corrective action, and, where appropriate, adapting the plant to the soil conditions. If managed properly, innovative cropping systems to overcome these constraints can improve rather than degrade soil conditions. Regardless of the advances in biotechnology, crop adaptation, and integrated cropping systems, chemical fertilizers will, in future, play an even greater role in the nutrition of both rainfed and irrigated crops in Mediterranean agriculture. Crop nutrition research will have to keep pace with agronomic developments. The future challenge in soil fertility-crop nutrition lies as much in overcoming obstacles to technology transfer as in the generation of new knowledge. This selective review is based mainly on the author's research experiences in the field of soil fertility and crop nutrition in the WANA region for the past 32 years. It seeks to highlight research developments within the context of the region's crop production constraints, culminating in a perspective on future research challenges within the framework of cooperation between international institutions and the region's national research and development programs.