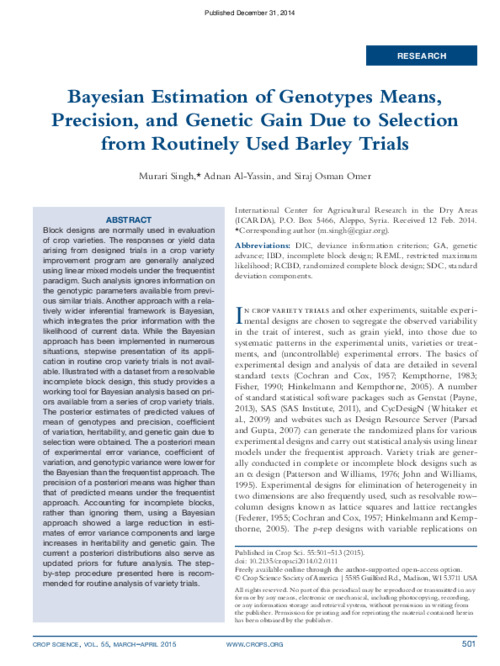 Block designs are normally used in evaluation of crop varieties. The responses or yield data arising from designed trials in a crop variety improvement program are generally analyzed using linear mixed models under the frequentist paradigm. Such analysis ignores information on the genotypic parameters available from previous similar trials. Another approach with a relatively wider inferential framework is Bayesian, which integrates the prior information with the likelihood of current data. While the Bayesian approach has been implemented in numerous situations, stepwise presentation of its application in routine crop variety trials is not available. Illustrated with a dataset from a resolvable incomplete block design, this study provides a working tool for Bayesian analysis based on priors available from a series of crop variety trials. The posterior estimates of predicted values of mean of genotypes and precision, coefficient of variation, heritability, and genetic gain due to selection were obtained. The a posteriori mean of experimental error variance, coefficient of variation, and genotypic variance were lower for the Bayesian than the frequentist approach. The precision of a posteriori means was higher than that of predicted means under the frequentist approach. Accounting for incomplete blocks, rather than ignoring them, using a Bayesian approach showed a large reduction in estimates of error variance components and large increases in heritability and genetic gain. The current a posteriori distributions also serve as updated priors for future analysis. The step-by-step procedure presented here is recommended for routine analysis of variety trials.