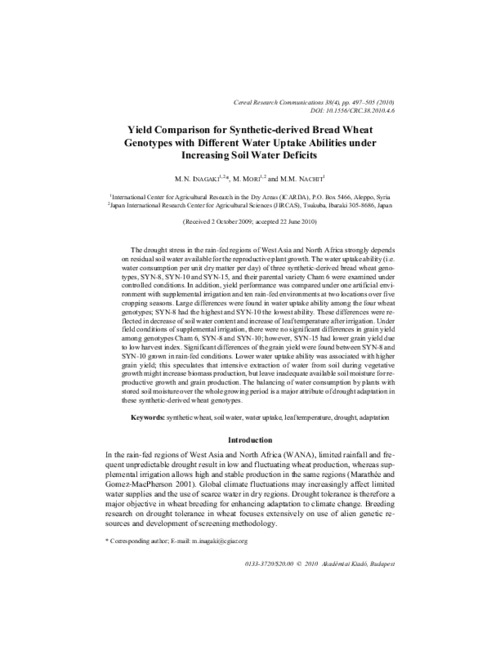 The drought stress in the rain-fed regions of West Asia and North Africa strongly depends on residual soil water available for the reproductive plant growth. The water uptake ability (i.e. water consumption per unit dry matter per day) of three synthetic-derived bread wheat genotypes, SYN-8, SYN-10 and SYN-15, and their parental variety Cham 6 were examined under controlled conditions. In addition, yield performance was compared under one artificial environment with supplemental irrigation and ten rain-fed environments at two locations over five cropping seasons. Large differences were found in water uptake ability among the four wheat genotypes; SYN-8 had the highest and SYN-10 the lowest ability. These differences were reflected in decrease of soil water content and increase of leaf temperature after irrigation. Under field conditions of supplemental irrigation, there were no significant differences in grain yield among genotypes Cham 6, SYN-8 and SYN-10; however, SYN-15 had lower grain yield due to low harvest index. Significant differences of the grain yield were found between SYN-8 and SYN-10 grown in rain-fed conditions. Lower water uptake ability was associated with higher grain yield; this speculates that intensive extraction of water from soil during vegetative growth might increase biomass production, but leave inadequate available soil moisture for reproductive growth and grain production. The balancing of water consumption by plants with stored soil moisture over the whole growing period is a major attribute of drought adaptation in these synthetic-derived wheat genotypes.