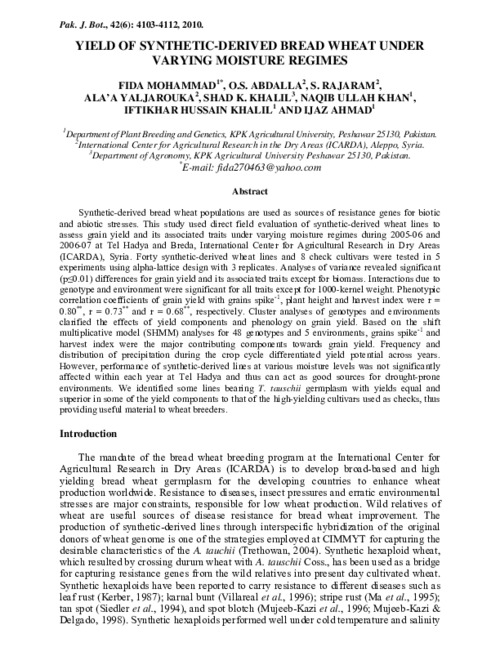 Synthetic-derived bread wheat populations are used as sources of resistance genes for biotic and abiotic stresses. This study used direct field evaluation of synthetic-derived wheat lines to assess grain yield and its associated traits under varying moisture regimes during 2005-06 and 2006-07 at Tel Hadya and Breda, International Center for Agricultural Research in Dry Areas (ICARDA), Syria. Forty synthetic-derived wheat lines and 8 check cultivars were tested in 5 experiments using alpha-lattice design with 3 replicates. Analyses of variance revealed significant (p <= 0.01) differences for grain yield and its associated traits except for biomass. Interactions due to genotype and environment were significant for all traits except for 1000-kernel weight. Phenotypic correlation coefficients of grain yield with grains spike(-1), plant height and harvest index were r = 0.80**, r = 0.73** and r = 0.68**, respectively. Cluster analyses of genotypes and environments clarified the effects of yield components and phenology on grain yield. Based on the shift multiplicative model (SHMM) analyses for 48 genotypes and 5 environments, grains spike-1 and harvest index were the major contributing components towards grain yield. Frequency and distribution of precipitation during the crop cycle differentiated yield potential across years. However, performance of synthetic-derived lines at various moisture levels was not significantly affected within each year at Tel Hadya and thus can act as good sources for drought-prone environments. We identified some lines bearing T. tauschii germplasm with yields equal and superior in some of the yield components to that of the high-yielding cultivars used as checks, thus providing useful material to wheat breeders.