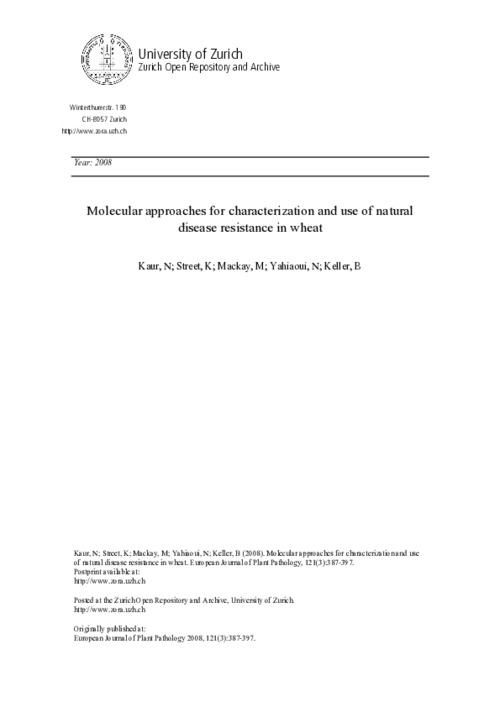 Wheat production is threatened by a constantly changing population of pathogen species and races. Given the rapid ability of many pathogens to overcome genetic resistance, the identification and practical implementation of new sources of resistance is essential. Landraces and wild relatives of wheat have played an important role as genetic resources for the improvement of disease resistance. The use of molecular approaches, particularly molecular markers, has allowed better characterization of the genetic diversity in wheat germplasm. In addition, the molecular cloning of major resistance (R) genes has recently been achieved in the large, polyploid wheat genome. For the first time this allows the study and analysis of the genetic variability of wheat R loci at the molecular level and therefore, to screen for allelic variation at such loci in the gene pool. Thus, strategies such as allele mining and ecotilling are now possible for characterization of wheat disease resistance. Here, we discuss the approaches, resources and potential tools to characterize and utilize the naturally occurring resistance diversity in wheat. We also report a first step in allele mining, where we characterize the occurrence of known resistance alleles at the wheat Pm3 powdery mildew resistance locus in a set of 1,320 landraces assembled on the basis of eco-geographical criteria. From known Pm3 R alleles, only Pm3b was frequently identified (3% of the tested accessions). In the same set of landraces, we found a high frequency of a Pm3 haplotype carrying a susceptible allele of Pm3. This analysis allowed the identification of a set of resistant lines where new potentially functional alleles would be present. Newly identified resistance alleles will enrich the genetic basis of resistance in breeding programmes and contribute to wheat improvement.