Wind erosion in a marginal Mediterranean dryland area: a case study from the Khanasser Valley, Syria 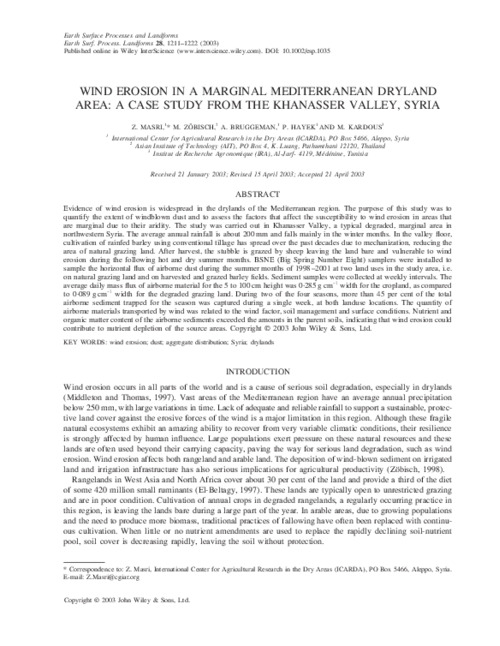 Evidence of wind erosion is widespread in the drylands of the Mediterranean region. The purpose of this study was to quantify the extent of windblown dust and to assess the factors that affect the susceptibility to wind erosion in areas that are marginal due to their aridity. The study was carried out in Khanasser Valley, a typical degraded, marginal area in northwestern Syria. The average annual rainfall is about 200 mm and falls mainly in the winter months. In the valley ﬂoor, cultivation of rainfed barley using conventional tillage has spread over the past decades due to mechanization, reducing the area of natural grazing land. After harvest, the stubble is grazed by sheep leaving the land bare and vulnerable to wind erosion during the following hot and dry summer months. BSNE (Big Spring Number Eight) samplers were installed to sample the horizontal ﬂux of airborne dust during the summer months of 1998–2001 at two land uses in the study area, i.e. on natural grazing land and on harvested and grazed barley ﬁelds. Sediment samples were collected at weekly intervals. The average daily mass ﬂux of airborne material for the 5 to 100 cm height was 0·285 g cm−1 width for the cropland, as compared to 0·089 g cm−1 width for the degraded grazing land. During two of the four seasons, more than 45 per cent of the total airborne sediment trapped for the season was captured during a single week, at both landuse locations. The quantity of airborne materials transported by wind was related to the wind factor, soil management and surface conditions. Nutrient and organic matter content of the airborne sediments exceeded the amounts in the parent soils, indicating that wind erosion could contribute to nutrient depletion of the source areas. Copyright © 2003 John Wiley & Sons, Ltd.