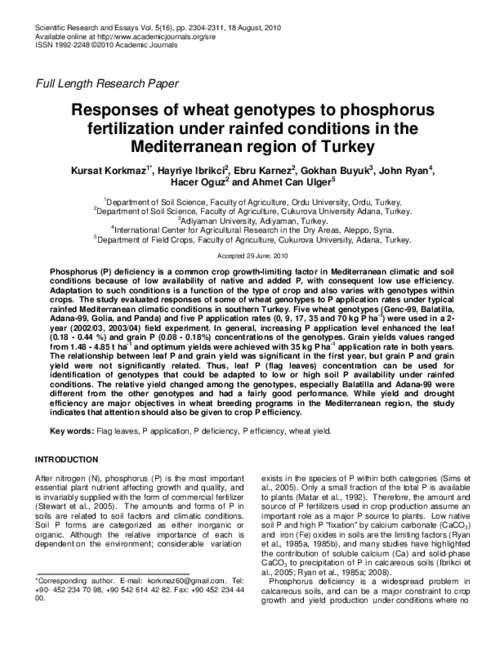 Phosphorus (P) deficiency is a common crop growth-limiting factor in Mediterranean climatic and soil conditions because of low availability of native and added P, with consequent low use efficiency. Adaptation to such conditions is a function of the type of crop and also varies with genotypes within crops. The study evaluated responses of some of wheat genotypes to P application rates under typical rainfed Mediterranean climatic conditions in southern Turkey. Five wheat genotypes (Genc-99, Balatilla, Adana-99, Golia, and Panda) and five P application rates (0, 9, 17, 35 and 70 kg P ha(-1)) were used in a 2-year (2002/03, 2003/04) field experiment. In general, increasing P application level enhanced the leaf (0.18 - 0.44 %) and grain P (0.08 - 0.18%) concentrations of the genotypes. Grain yields values ranged from 1.48 - 4.85 t ha(-1) and optimum yields were achieved with 35 kg P ha(-1) application rate in both years. The relationship between leaf P and grain yield was significant in the first year, but grain P and grain yield were not significantly related. Thus, leaf P (flag leaves) concentration can be used for identification of genotypes that could be adapted to low or high soil P availability under rainfed conditions. The relative yield changed among the genotypes, especially Balatilla and Adana-99 were different from the other genotypes and had a fairly good performance. While yield and drought efficiency are major objectives in wheat breeding programs in the Mediterranean region, the study indicates that attention should also be given to crop P efficiency.