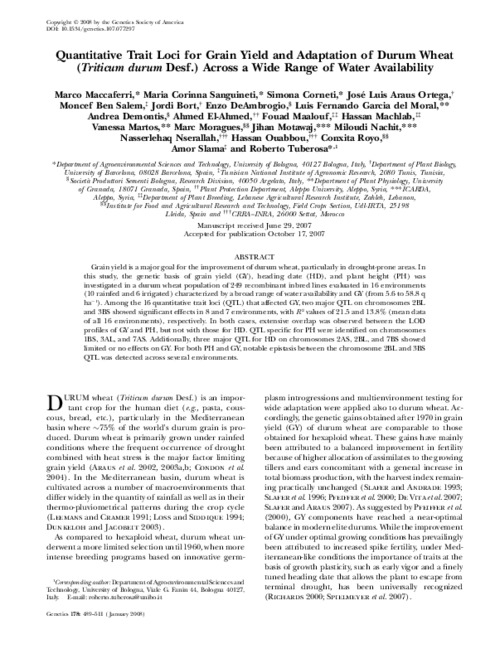 Grain yield is a major goal for the improvement of durum wheat, particularly in drought-prone areas. In this study, the genetic basis of grain yield (GY), heading date (HD), and plant height (PH) was investigated in a durum wheat population of 249 recombinant inbred lines evaluated in 16 environments (10 rainfed and 6 irrigated) characterized by a broad range of water availability and GY (from 5.6 to 58.8 q ha(-1)). Among the 16 quantitative trait loci (QTL) that affected GY, two major QTL on chromosomes 2BL and 3BS showed significant effects in 8 and 7 environments, with R 2 values of 21.5 and 13.8% (mean data of all 16 environments), respectively. In both cases, extensive overlap was observed between the LOD profiles of GY and PH, but not with those for HD. QTL specific for PH were identified on chromosomes HIS, 3AL, and 7AS. Additionally, three major QTL for HD on chromosomes 2AS, 2BL, and 7BS showed limited or no effects on GY For both PH and GY, notable epistasis between the chromosome 2BL and 3BS QTL was detected across several environments.