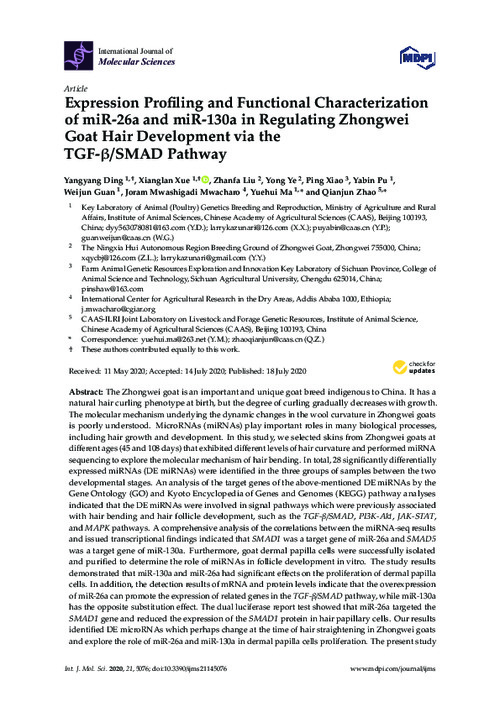 The Zhongwei goat is an important and unique goat breed indigenous to China. It has a natural hair curling phenotype at birth, but the degree of curling gradually decreases with growth. The molecular mechanism underlying the dynamic changes in the wool curvature in Zhongwei goats is poorly understood. MicroRNAs (miRNAs) play important roles in many biological processes, including hair growth and development. In this study, we selected skins from Zhongwei goats at different ages (45 and 108 days) that exhibited different levels of hair curvature and performed miRNA sequencing to explore the molecular mechanism of hair bending. In total, 28 significantly differentially expressed miRNAs (DE miRNAs) were identified in the three groups of samples between the two developmental stages. An analysis of the target genes of the above-mentioned DE miRNAs by the Gene Ontology (GO) and Kyoto Encyclopedia of Genes and Genomes (KEGG) pathway analyses indicated that the DE miRNAs were involved in signal pathways which were previously associated with hair bending and hair follicle development, such as the TGF-β/SMAD, PI3K-Akt, JAK-STAT, and MAPK pathways. A comprehensive analysis of the correlations between the miRNA-seq results and issued transcriptional findings indicated that SMAD1 was a target gene of miR-26a and SMAD5 was a target gene of miR-130a. Furthermore, goat dermal papilla cells were successfully isolated and purified to determine the role of miRNAs in follicle development in vitro. The study results demonstrated that miR-130a and miR-26a had significant effects on the proliferation of dermal papilla cells. In addition, the detection results of mRNA and protein levels indicate that the overexpression of miR-26a can promote the expression of related genes in the TGF-β/SMAD pathway, while miR-130a has the opposite substitution effect. The dual luciferase report test showed that miR-26a targeted the SMAD1 gene and reduced the expression of the SMAD1 protein in hair papillary cells. Our results identified DE microRNAs which perhaps change at the time of hair straightening in Zhongwei goats and explore the role of miR-26a and miR-130a in dermal papilla cells proliferation. The present study provided a theoretical basis to explore the mechanisms underlying the Zhongwei hair growth and curly phenotype.