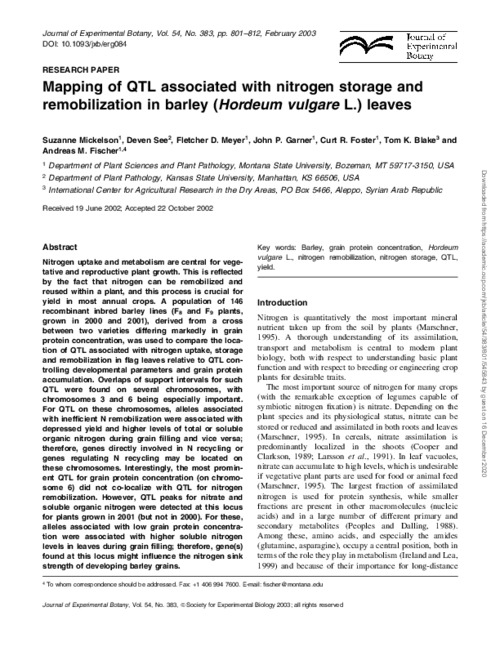 Nitrogen uptake and metabolism are central for vegetative and reproductive plant growth. This is reflected by the fact that nitrogen can be remobilized and reused within a plant, and this process is crucial for yield in most annual crops. A population of 146 recombinant inbred barley lines (F8 and F9 plants, grown in 2000 and 2001), derived from a cross between two varieties differing markedly in grain protein concentration, was used to compare the location of QTL associated with nitrogen uptake, storage and remobilization in flag leaves relative to QTL controlling developmental parameters and grain protein accumulation. Overlaps of support intervals for such QTL were found on several chromosomes, with chromosomes 3 and 6 being especially important. For QTL on these chromosomes, alleles associated with inefficient N remobilization were associated with depressed yield and higher levels of total or soluble organic nitrogen during grain filling and vice versa; therefore, genes directly involved in N recycling or genes regulating N recycling may be located on these chromosomes. Interestingly, the most prominent QTL for grain protein concentration (on chromosome 6) did not co‐localize with QTL for nitrogen remobilization. However, QTL peaks for nitrate and soluble organic nitrogen were detected at this locus for plants grown in 2001 (but not in 2000). For these, alleles associated with low grain protein concentration were associated with higher soluble nitrogen levels in leaves during grain filling; therefore, gene(s) found at this locus might influence the nitrogen sink strength of developing barley grains.