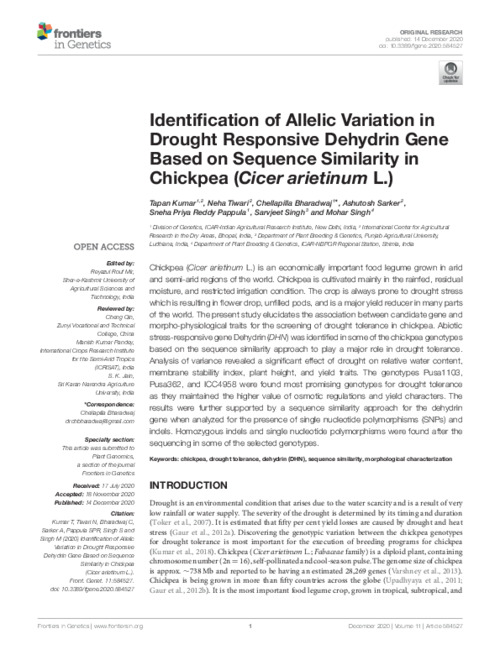 Chickpea (Cicer arietinum L.) is an economically important food legume grown in arid and semi-arid regions of the world. Chickpea is cultivated mainly in the rainfed, residual moisture, and restricted irrigation condition. The crop is always prone to drought stress which is resulting in flower drop, unfilled pods, and is a major yield reducer in many parts of the world. The present study elucidates the association between candidate gene and morpho-physiological traits for the screening of drought tolerance in chickpea. Abiotic stress-responsive gene Dehydrin (DHN) was identified in some of the chickpea genotypes based on the sequence similarity approach to play a major role in drought tolerance. Analysis of variance revealed a significant effect of drought on relative water content, membrane stability index, plant height, and yield traits. The genotypes Pusa1103, Pusa362, and ICC4958 were found most promising genotypes for drought tolerance as they maintained the higher value of osmotic regulations and yield characters. The results were further supported by a sequence similarity approach for the dehydrin gene when analyzed for the presence of single nucleotide polymorphisms (SNPs) and indels. Homozygous indels and single nucleotide polymorphisms were found after the sequencing in some of the selected genotypes.