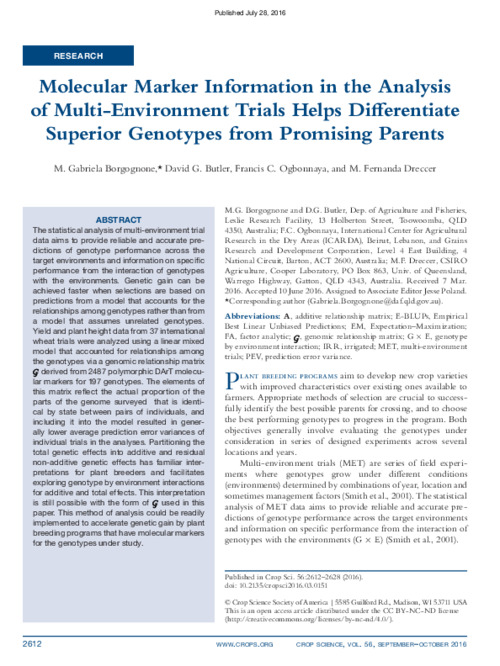 The statistical analysis of multi-environment trial data aims to provide reliable and accurate predictions of genotype performance across the target environments and information on specific performance from the interaction of genotypes with the environments. Genetic gain can be achieved faster when selections are based on predictions from a model that accounts for the relationships among genotypes rather than from a model that assumes unrelated genotypes. Yield and plant height data from 37 international wheat trials were analyzed using a linear mixed model that accounted for relationships among the genotypes via a genomic relationship matrix G derived from 2487 polymorphic DArT molecular markers for 197 genotypes. The elements of this matrix reflect the actual proportion of the parts of the genome surveyed that is identical by state between pairs of individuals, and including it into the model resulted in generally lower average prediction error variances of individual trials in the analyses. Partitioning the total genetic effects into additive and residual non-additive genetic effects has familiar interpretations for plant breeders and facilitates exploring genotype by environment interactions for additive and total effects. This interpretation is still possible with the form of G used in this paper. This method of analysis could be readily implemented to accelerate genetic gain by plant breeding programs that have molecular markers for the genotypes under study.