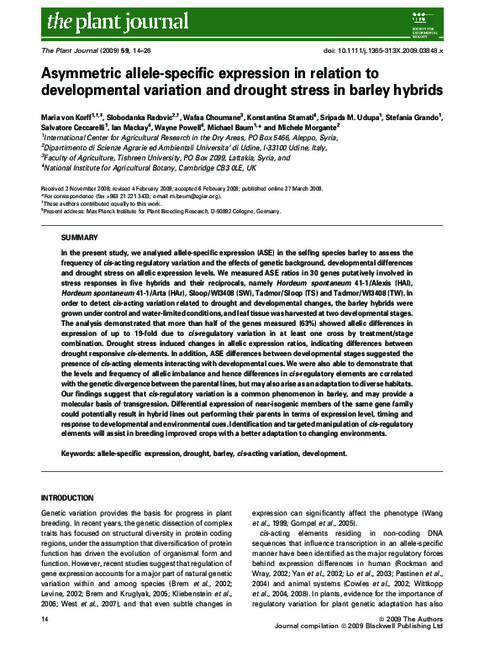 P>In the present study, we analysed allele-specific expression (ASE) in the selfing species barley to assess the frequency of cis-acting regulatory variation and the effects of genetic background, developmental differences and drought stress on allelic expression levels. We measured ASE ratios in 30 genes putatively involved in stress responses in five hybrids and their reciprocals, namely Hordeum spontaneum 41-1/Alexis (HAl), Hordeum spontaneum 41-1/Arta (HAr), Sloop/WI3408 (SW), Tadmor/Sloop (TS) and Tadmor/WI3408 (TW). In order to detect cis-acting variation related to drought and developmental changes, the barley hybrids were grown under control and water-limited conditions, and leaf tissue was harvested at two developmental stages. The analysis demonstrated that more than half of the genes measured (63%) showed allelic differences in expression of up to 19-fold due to cis-regulatory variation in at least one cross by treatment/stage combination. Drought stress induced changes in allelic expression ratios, indicating differences between drought responsive cis-elements. In addition, ASE differences between developmental stages suggested the presence of cis-acting elements interacting with developmental cues. We were also able to demonstrate that the levels and frequency of allelic imbalance and hence differences in cis-regulatory elements are correlated with the genetic divergence between the parental lines, but may also arise as an adaptation to diverse habitats. Our findings suggest that cis-regulatory variation is a common phenomenon in barley, and may provide a molecular basis of transgression. Differential expression of near-isogenic members of the same gene family could potentially result in hybrid lines out performing their parents in terms of expression level, timing and response to developmental and environmental cues. Identification and targeted manipulation of cis-regulatory elements will assist in breeding improved crops with a better adaptation to changing environments.