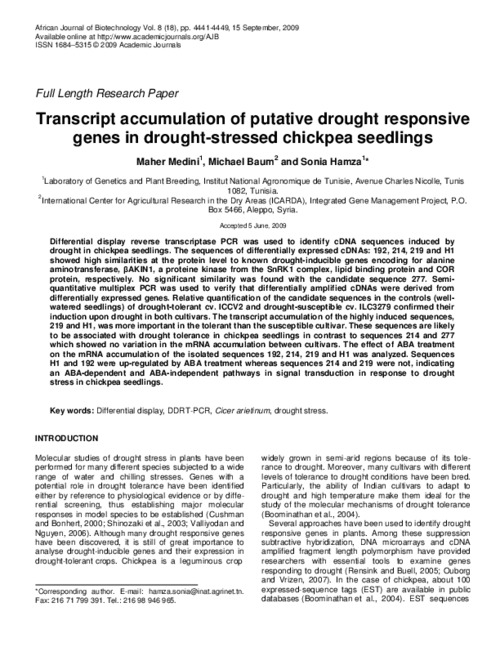 Differential display reverse transcriptase PCR was used to identify cDNA sequences induced by drought in chickpea seedlings. The sequences of differentially expressed cDNAs: 192, 214, 219 and H1 showed high similarities at the protein level to known drought-inducible genes encoding for alanine aminotransferase, beta AKIN1, a proteine kinase from the SnRK1 complex, lipid binding protein and COR protein, respectively. No significant similarity was found with the candidate sequence 277. Semi-quantitative multiplex PCR was used to verify that differentially amplified cDNAs were derived from differentially expressed genes. Relative quantification of the candidate sequences in the controls (well-watered seedlings) of drought-tolerant cv. ICCV2 and drought-susceptible cv. ILC3279 confirmed their induction upon drought in both cultivars. The transcript accumulation of the highly induced sequences, 219 and H1, was more important in the tolerant than the susceptible cultivar. These sequences are likely to be associated with drought tolerance in chickpea seedlings in contrast to sequences 214 and 277 which showed no variation in the mRNA accumulation between cultivars. The effect of ABA treatment on the mRNA accumulation of the isolated sequences 192, 214, 219 and H1 was analyzed. Sequences H1 and 192 were up-regulated by ABA treatment whereas sequences 214 and 219 were not, indicating an ABA-dependent and ABA-independent pathways in signal transduction in response to drought stress in chickpea seedlings.