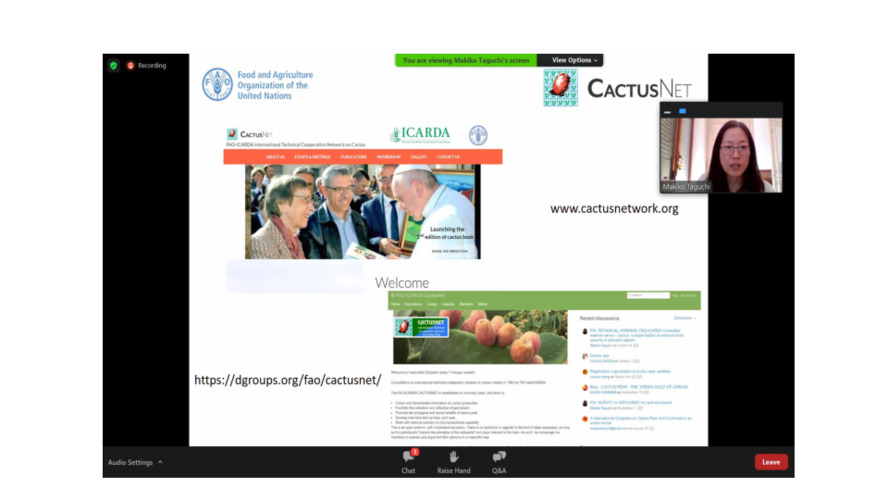 Presentation about cactus pear Cochineals : Cochineals have had dramatic relations between cactus pear and humans, which repeats itself in regions where these two organisms are non-native. Regularly, when wild cochineal (Dactylopius opuntiae) reaches a cactus pear (Opuntia ficus-indica) population in a non-native area, the insect destroys the plants. Control of cochineals depends on many factors, the main one being where the cactus pear and cochineal interplay occurs, whether in plantations or neglected populations, in a native or non-native region, as well the local weather and communal worldview. After taking into account these factors, then we may start to select the control mechanism to be applied, which the most common are pesticides (chemical and botanical), detergents, pressurized water, silicon powder, natural enemies, and others. Since biotic and abiotic factors as well as the use of cactus pear in a given region are particular, the management of the pest should be also specific in every case - nevertheless, global action must be considered. Cochineal dissemination to new areas seems to be just of matter of time. Border plant quarantine must be reinforced but also good agricultural practices must be fulfilled to limit the flow of cochineals. It is important to mention that cactus pear did not receive regular management as a crop in the majority of countries where they grow, maybe derived from the fact that cactus pear was or is considered an invasive species. The support from leaders of domestic agricultural institutions, decision makers from social, cultural, and political spheres, and the local training of cactus pear growers will be fundamental to face this situation. All efforts will lead to a proper management of cactus pear and may keep cochineal populations at acceptable thresholds