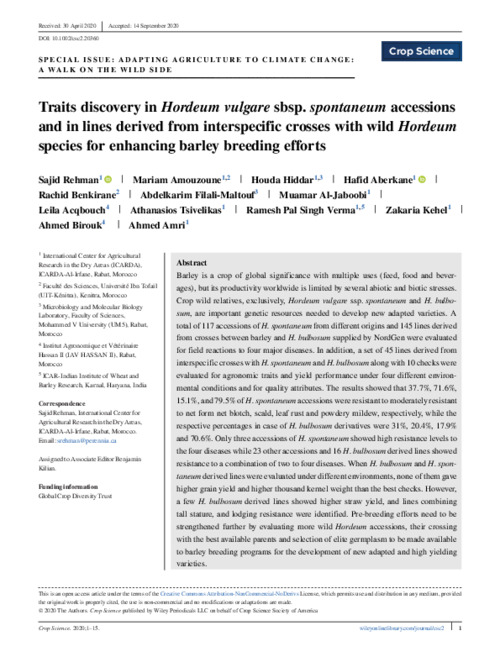 Barley is a crop of global significance with multiple uses (feed, food and beverages), but its productivity worldwide is limited by several abiotic and biotic stresses. Crop wild relatives, exclusively, Hordeum vulgare ssp. spontaneum and H. bulbosum, are important genetic resources needed to develop new adapted varieties. A total of 117 accessions of H. spontaneum from different origins and 145 lines derived from crosses between barley and H. bulbosum supplied by NordGen were evaluated for field reactions to four major diseases. In addition, a set of 45 lines derived from interspecific crosses with H. spontaneum and H. bulbosum along with 10 checks were evaluated for agronomic traits and yield performance under four different environmental conditions and for quality attributes. The results showed that 37.7%, 71.6%, 15.1%, and 79.5% of H. spontaneum accessions were resistant to moderately resistant to net form net blotch, scald, leaf rust and powdery mildew, respectively, while the respective percentages in case of H. bulbosum derivatives were 31%, 20.4%, 17.9% and 70.6%. Only three accessions of H. spontaneum showed high resistance levels to the four diseases while 23 other accessions and 16 H. bulbosum derived lines showed resistance to a combination of two to four diseases. When H. bulbosum and H. spontaneum derived lines were evaluated under different environments, none of them gave higher grain yield and higher thousand kernel weight than the best checks. However, a few H. bulbosum derived lines showed higher straw yield, and lines combining tall stature, and lodging resistance were identified. Pre‐breeding efforts need to be strengthened further by evaluating more wild Hordeum accessions, their crossing with the best available parents and selection of elite germplasm to be made available to barley breeding programs for the development of new adapted and high yielding varieties.