Economic and Environmental Evaluation of Different Irrigation Systems for Date Palm Production in the GCC Countries: The case of Oman and Saudi Arabia 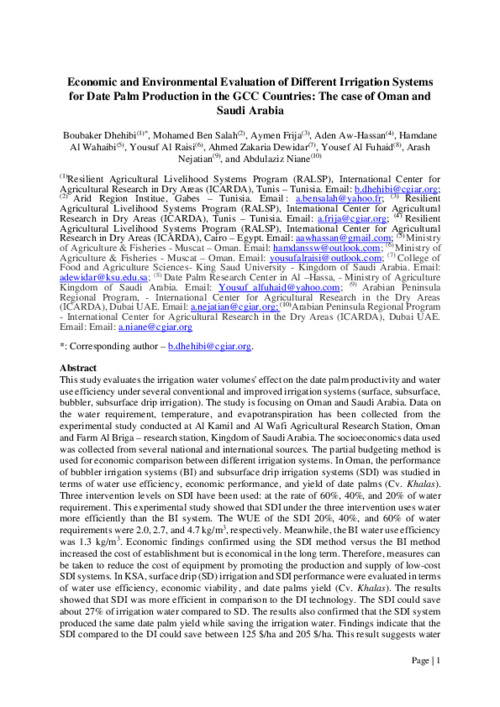 This study evaluates the irrigation water volumes' effect on the date palm productivity and water use efficiency under several conventional and improved irrigation systems (surface, subsurface, bubbler, subsurface drip irrigation). The study is focusing on Oman and Saudi Arabia. Data on the water requirement, temperature, and evapotranspiration has been collected from the experimental study conducted at Al Kamil and Al Wafi Agricultural Research Station, Oman, and Farm Al Briga – research station, Kingdom of Saudi Arabia. The socioeconomics data used was collected from several national and international sources. The partial budgeting method is used for economic comparison between different irrigation systems. In Oman, the performance of bubbler irrigation systems (BI) and subsurface drip irrigation systems (SDI) was studied in terms of water use efficiency, economic performance, and yield of date palms (Cv. Khalas). Three intervention levels on SDI have been used: at the rate of 60%, 40%, and 20% of water requirement. This experimental study showed that SDI under the three intervention uses water more efficiently than the BI system. The WUE of the SDI 20%, 40%, and 60% of water requirements were 2.0, 2.7, and 4.7 kg/m3, respectively. Meanwhile, the BI water use efficiency was 1.3 kg/m3. Economic findings confirmed using the SDI method versus the BI method increased the cost of establishment but is economical in the long term. Therefore, measures can be taken to reduce the cost of equipment by promoting the production and supply of low-cost SDI systems. In KSA, surface drip (SD) irrigation and SDI performance were evaluated in terms of water use efficiency, economic viability, and date palms yield (Cv. Khalas). The results showed that SDI was more efficient in comparison to the DI technology. The SDI could save about 27% of irrigation water compared to SD. The results also confirmed that the SDI system produced the same date palm yield while saving the irrigation water. Findings indicate that the SDI compared to the DI could save between 125 $/ha and 205 $/ha. This result suggests water economic profitability by using the SDI system in date palm farming. These findings indicate a significant difference in net profit. Overall, the adoption of modern irrigation techniques such as drip and subsurface drip irrigation is essential today for this very arid region. This is mainly to increase WUE and Yield. In a short time, the capital cost associated with installing such a system limits adopting this technology. Thus, to accelerate the adoption process of these technologies, it is imperative to create favorable conditions so that more farmers can benefit from such technologies' benefits. The creation of strong networking among different institutions related to applying this modern irrigation technology and public and private financial institutions and support services could be an example of mechanisms to enhance adoption.