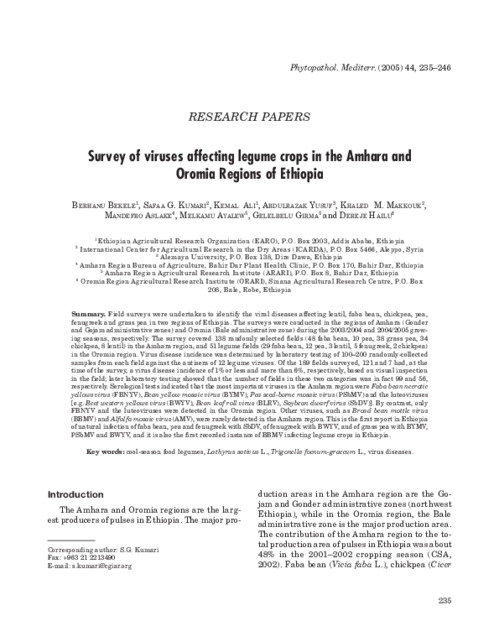 Field surveys were undertaken to identify the viral diseases affecting lentil, faba bean, chickpea, pea, fenugreek and grass pea in two regions of Ethiopia. The surveys were conducted in the regions of Amhara (Gonder and Gojam administrative zones) and Oromia (Bale administrative zone) during the 2003/2004 and 2004/2005 growing seasons, respectively. The survey covered 138 randomly selected fields (48 faba bean, 10 pea, 38 grass pea, 34 chickpea, 8 lentil) in the Amhara region, and 51 legume fields (29 faba bean, 12 pea, 3 lentil, 5 fenugreek, 2 chickpea) in the Oromia region. Virus disease incidence was determined by laboratory testing of 100–200 randomly-collected samples from each field against the antisera of 12 legume viruses. Of the 189 fields surveyed, 121 and 7 had, at the time of the survey, a virus disease incidence of 1% or less and more than 6%, respectively, based on visual inspection in the field; later laboratory testing showed that the number of fields in these two categories was in fact 99 and 56, respectively. Serological tests indicated that the most important viruses in the Amhara region were Faba bean necrotic yellows virus (FBNYV), Bean yellow mosaic virus (BYMV), Pea seed-borne mosaic virus (PSbMV) and the luteoviruses [e.g. Beet western yellows virus (BWYV), Bean leaf roll virus (BLRV), Soybean dwarf virus (SbDV)]. By contrast, only FBNYV and the luteoviruses were detected in the Oromia region. Other viruses, such as Broad bean mottle virus (BBMV) and Alfalfa mosaic virus (AMV), were rarely detected in the Amhara region. This is the first report in Ethiopia of natural infection of faba bean, pea and fenugreek with SbDV, of fenugreek with BWYV, and of grass pea with BYMV, PSbMV and BWYV, and it is also the first recorded instance of BBMV infecting legume crops in Ethiopia.