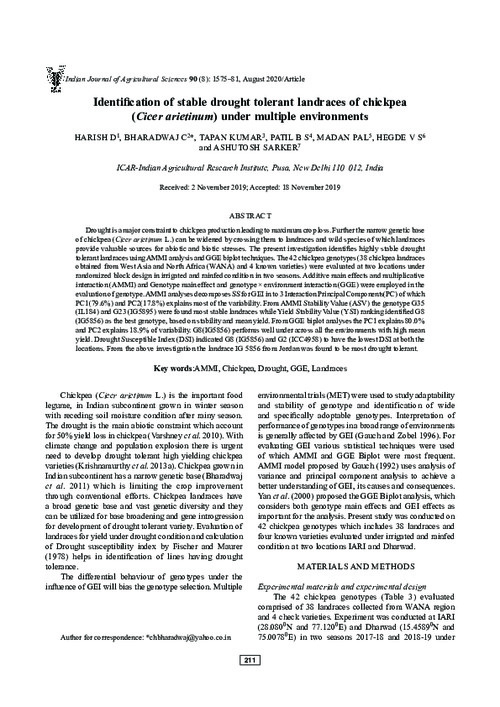 Drought is a major constraint to chickpea production leading to maximum crop loss. Further the narrow genetic base of chickpea (Cicer arietinum L.) can be widened by crossing them to landraces and wild species of which landraces provide valuable sources for abiotic and biotic stresses. The present investigation identifies highly stable drought tolerant landraces using AMMI analysis and GGE biplot techniques. The 42 chickpea genotypes (38 chickpea landraces obtained from West Asia and North Africa (WANA) and 4 known varieties) were evaluated at two locations under randomized block design in irrigated and rainfed condition in two seasons. Additive main effects and multiplicative interaction (AMMI) and Genotype main effect and genotype × environment interaction (GGE) were employed in the evaluation of genotype. AMMI analyses decomposes SS for GEI in to 3 Interaction Principal Components(PC) of which C1(79.6%) and PC2(17.8%) explains most of the variability. From AMMI Stability Value (ASV) the genotype G35 (IL184) and G23 (IG5895) were found most stable landraces while Yield Stability Value (YSI) ranking identified G8 (IG5856) as the best genotype, based on stability and mean yield. From GGE biplot analyses the PC1 explains 80.0% and PC2 explains 18.9% of variability. G8(IG5856) performs well under across all the environments with high mean yield. Drought Susceptible Index (DSI) indicated G8 (IG5856) and G2 (ICC4958) to have the lowest DSI at both the locations. From the above investigation the landrace IG 5856 from Jordan was found to be most drought tolerant.