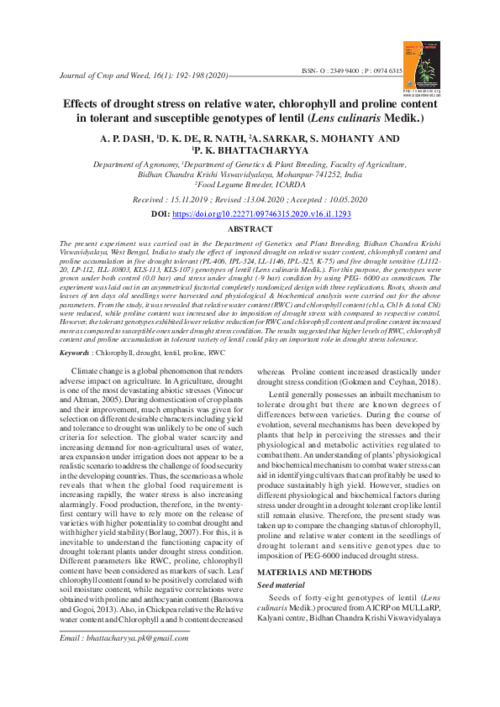 The present experiment was carried out in the Department of Genetics and Plant Breeding, Bidhan Chandra Krishi Viswavidyalaya, West Bengal, India to study the effect of imposed drought on relative water content, chlorophyll content and proline accumulation in five drought tolerant (PL-406, IPL-324, LL-1146, IPL-325, K-75) and five drought sensitive (L1112- 20, LP-112, ILL-10803, KLS-113, KLS-107) genotypes of lentil (Lens culinaris Medik.). For this purpose, the genotypes were grown under both control (0.0 bar) and stress under drought (-9 bar) condition by using PEG- 6000 as osmoticum. The experiment was laid out in an asymmetrical factorial completely randomized design with three replications. Roots, shoots and leaves of ten days old seedlings were harvested and physiological & biochemical analysis were carried out for the above parameters. From the study, it was revealed that relative water content (RWC) and chlorophyll content (chl a, Chl b & total Chl) were reduced, while proline content was increased due to imposition of drought stress with compared to respective control. However, the tolerant genotypes exhibited lower relative reduction for RWC and chlorophyll content and proline content increased more as compared to susceptible ones under drought stress condition. The results suggested that higher levels of RWC, chlorophyll content and proline accumulation in tolerant variety of lentil could play an important role in drought stress tolerance.