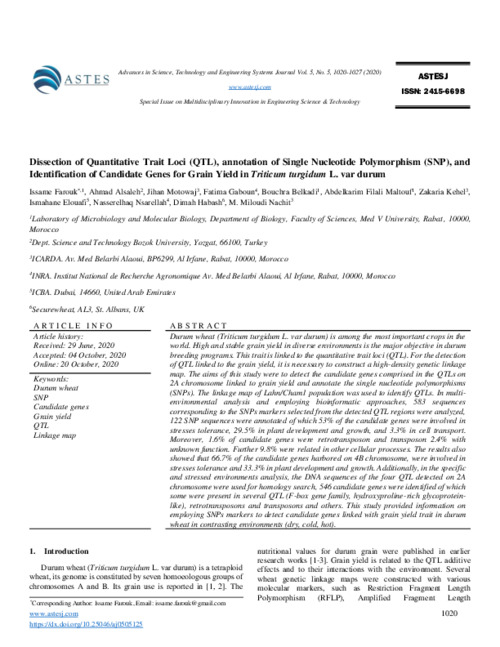 Durum wheat (Triticum turgidum L. var durum) is among the most important crops in the world. High and stable grain yield in diverse environments is the major objective in durum breeding programs. This trait is linked to the quantitative trait loci (QTL). For the detection of QTL linked to the grain yield, it is necessary to construct a high-density genetic linkage map. The aims of this study were to detect the candidate genes comprised in the QTLs on 2A chromosome linked to grain yield and annotate the single nucleotide polymorphisms (SNPs). The linkage map of Lahn/Cham1 population was used to identify QTLs. In multi-environmental analysis and employing bioinformatic approaches, 583 sequences corresponding to the SNPs markers selected from the detected QTL regions were analyzed, 122 SNP sequences were annotated of which 53% of the candidate genes were involved in stresses tolerance, 29.5% in plant development and growth, and 3.3% in cell transport. Moreover, 1.6% of candidate genes were retrotransposon and transposon 2.4% with unknown function. Further 9.8% were related in other cellular processes. The results also showed that 66.7% of the candidate genes harbored on 4B chromosome, were involved in stresses tolerance and 33.3% in plant development and growth. Additionally, in the specific and stressed environments analysis, the DNA sequences of the four QTL detected on 2A chromosome were used for homology search, 546 candidate genes were identified of which some were present in several QTL (F-box gene family, hydroxyproline-rich glycoprotein-like), retrotransposons and transposons and others. This study provided information on employing SNPs markers to detect candidate genes linked with grain yield trait in durum wheat in contrasting environments (dry, cold, hot).