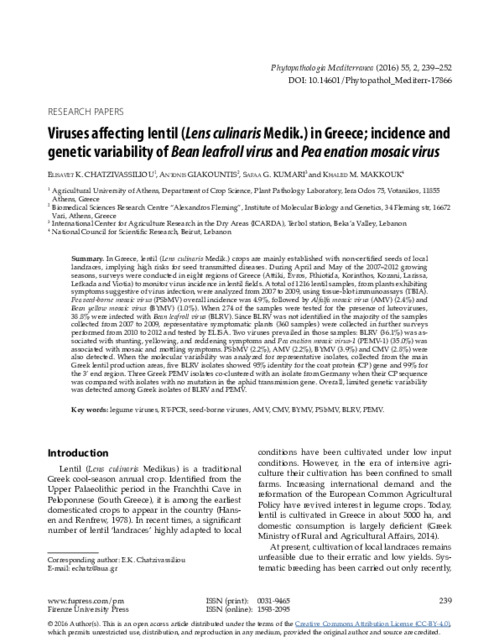 In Greece, lentil (Lens culinaris Medik.) crops are mainly established with non-certified seeds of local landraces, implying high risks for seed transmitted diseases. During April and May of the 2007-2012 growing seasons, surveys were conducted in eight regions of Greece (Attiki, Evros, Fthiotida, Korinthos, Kozani, Larissa, Lefkada and Viotia) to monitor virus incidence in lentil fields. A total of 1216 lentil samples, from plants exhibiting symptoms suggestive of virus infection, were analyzed from 2007 to 2009, using tissue-blot immunoassays (TBIA). Pea seed-borne mosaic virus (PSbMV) overall incidence was 4.9%, followed by Alfalfa mosaic virus (AMV) (2.4%) and Bean yellow mosaic virus (BYMV) (1.0%). When 274 of the samples were tested for the presence of luteoviruses, 38.8% were infected with Bean leafroll virus (BLRV). Since BLRV was not identified in the majority of the samples collected from 2007 to 2009, representative symptomatic plants (360 samples) were collected in further surveys performed from 2010 to 2012 and tested by ELISA. Two viruses prevailed in those samples: BLRV (36.1%) was associated with stunting, yellowing, and reddening symptoms and Pea enation mosaic virus-1 (PEMV-1) (35.0%) was associated with mosaic and mottling symptoms. PSbMV (2.2%), AMV (2.2%), BYMV (3.9%) and CMV (2.8%) were also detected. When the molecular variability was analyzed for representative isolates, collected from the main Greek lentil production areas, five BLRV isolates showed 95% identity for the coat protein (CP) gene and 99% for the 3' end region. Three Greek PEMV isolates co-clustered with an isolate from Germany when their CP sequence was compared with isolates with no mutation in the aphid transmission gene. Overall, limited genetic variability was detected among Greek isolates of BLRV and PEMV.