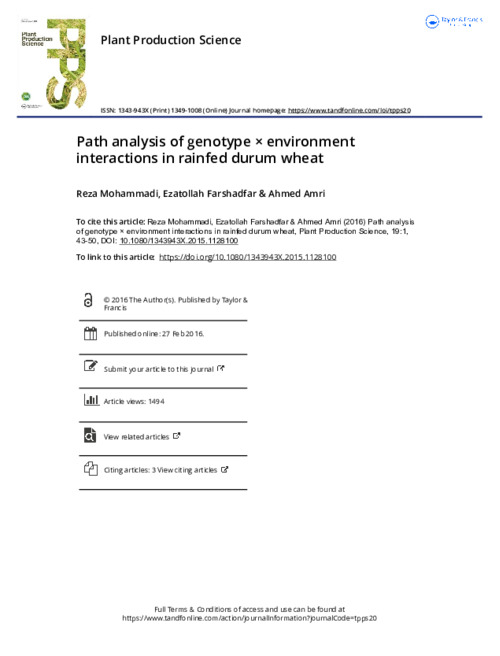 This study was investigated to analyze genotype x environment (GE) interactions for grain yield and its components and to investigate the mechanism by which the stability of grain yield is achieved in rainfed durum wheat. Twenty-four durum wheat genotypes (breeding lines, old, and new varieties) along with one old bread wheat cultivar were tested in 21 diversified rainfed environments during 2010-2013 cropping seasons. The data were analyzed by path analysis model which is composed of a main effect and four multiplicative effects. The flowering time (X1), maturity time (X2), plant height (X3), and 1000-kernel weight (X4) were assumed to be sequential characters for the development of grain yield productivity (Y) in rainfed durum wheat. A high relationship (p < .01) between observed and expected yields of genotypes in different environments confirmed the validity of the causal scheme adopted in the analysis. Comparison the estimates of components provided information on the degree of response of each genotype to the environmental stresses. The results indicated that higher grain yields are associated with higher kernel weight (v(4)), which resulted from early flowering (v(1)), and so more emphasis should be given to these traits for the improvement of yield potential in durum wheat under highland rainfed conditions of Iran. Positive correlation of stability variance (sigma(2)) with v(4) component indicated that the kernel weight is the main contributor towards GE interaction for grain yield in rainfed durum wheat.