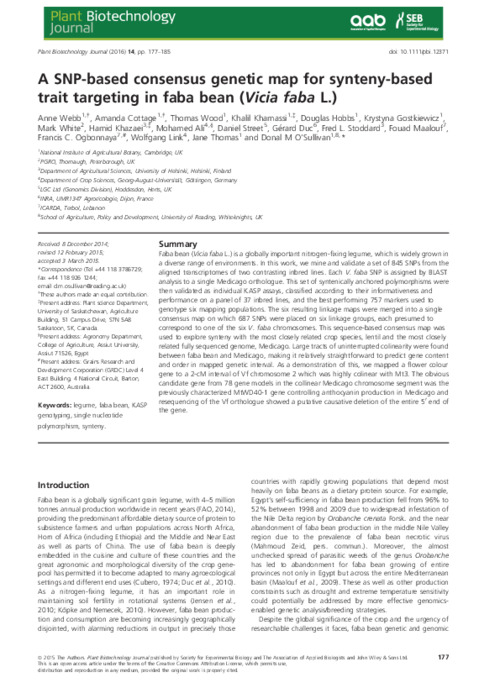 Faba bean (Vicia faba L.) is a globally important nitrogen-fixing legume, which is widely grown in a diverse range of environments. In this work, we mine and validate a set of 845 SNPs from the aligned transcriptomes of two contrasting inbred lines. Each V. faba SNP is assigned by BLAST analysis to a single Medicago orthologue. This set of syntenically anchored polymorphisms were then validated as individual KASP assays, classified according to their informativeness and performance on a panel of 37 inbred lines, and the best performing 757 markers used to genotype six mapping populations. The six resulting linkage maps were merged into a single consensus map on which 687 SNPs were placed on six linkage groups, each presumed to correspond to one of the six V. faba chromosomes. This sequence-based consensus map was used to explore synteny with the most closely related crop species, lentil and the most closely related fully sequenced genome, Medicago. Large tracts of uninterrupted colinearity were found between faba bean and Medicago, making it relatively straightforward to predict gene content and order in mapped genetic interval. As a demonstration of this, we mapped a flower colour gene to a 2-cM interval of Vf chromosome 2 which was highly colinear with Mt3. The obvious candidate gene from 78 gene models in the collinear Medicago chromosome segment was the previously characterized MtWD40-1 gene controlling anthocyanin production in Medicago and resequencing of the Vf orthologue showed a putative causative deletion of the entire 50 end of the gene.