Vulnerability of Barley to African Pathotypes of Puccinia graminis f. sp. tritici and Sources of Resistance 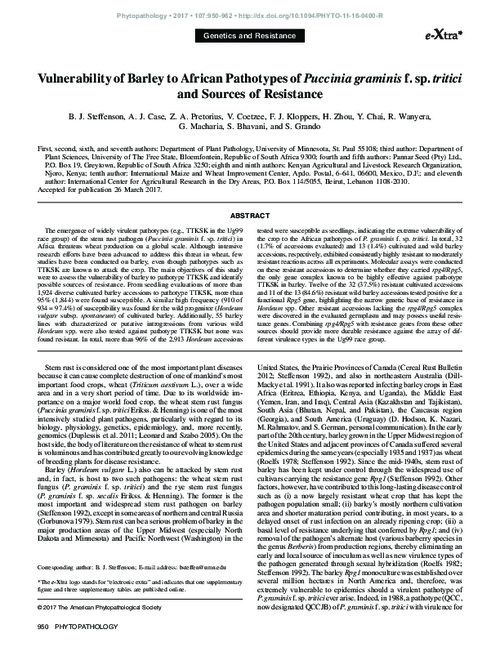 The emergence of widely virulent pathotypes (e.g., TTKSK in the Ug99 race group) of the stem rust pathogen (Puccinia graminis f.sp. tritici) in Africa threatens wheat production on a global scale. Although intensive research efforts have been advanced to address this threat in wheat, few studies have been conducted on barley, even though pathotypes such as TTKSK are known to attack the crop. The main objectives of this study were to assess the vulnerability of barley to pathotype TTKSK and identify possible sources of resistance. From seedling evaluations of more than 1,924 diverse cultivated barley accessions to pathotype TTKSK, more than 95% (1,844) were found susceptible. A similar high frequency (910 of 934 = 97.4%) of susceptibility was found for the wild progenitor (Hordeum vulgare subsp. spontanewn) of cultivated barley. Additionally, 55 barley lines with characterized or putative introgressions from various wild Hordeum spp. were also tested against pathotype TTKSK but none was found resistant. In total, more than 96% of the 2,913 Hordeum accessions tested were susceptible as seedlings, indicating the extreme vulnerability of the crop to the African pathotypes of P. graminis f. sp. tritici. In total, 32 (1.7% of accessions evaluated) and 13 (1.4%) cultivated and wild barley accessions, respectively, exhibited consistently highly resistant to moderately resistant reactions across all experiments. Molecular assays were conducted on these resistant accessions to determine whether they carried rpg4/Rpg5, the only gene complex known to be highly effective against pathotype TTKSK in barley. Twelve of the 32 (37.5%) resistant cultivated accessions and 11 of the 13 (84.6%) resistant wild barley accessions tested positive for a functional Rpg5 gene, highlighting the narrow genetic base of resistance in Hordeum spp. Other resistant accessions lacking the rpg4/Rpg5 complex were discovered in the evaluated germplasm and may possess useful resistance genes. Combining rpg4/Rpg5 with resistance genes from these other sources should provide more durable resistance against the array of different virulence types in the Ug99 race group.