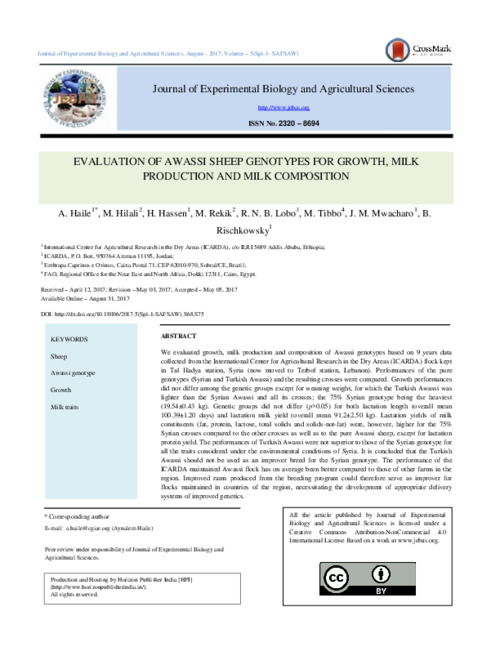 We evaluated growth, milk production and composition of Awassi genotypes based on 9 years data collected from the International Center for Agricultural Research in the Dry Areas (ICARDA) flock kept in Tal Hadya station, Syria (now moved to Terbol station, Lebanon). Performances of the pure genotypes (Syrian and Turkish Awassi) and the resulting crosses were compared. Growth performances did not differ among the genetic groups except for weaning weight, for which the Turkish Awassi was lighter than the Syrian Awassi and all its crosses; the 75% Syrian genotype being the heaviest (19.54 +/- 0.43 kg). Genetic groups did not differ (p>0.05) for both lactation length (overall mean 100.39 +/- 1.20 days) and lactation milk yield (overall mean 91.2 +/- 2.50 kg). Lactation yields of milk constituents (fat, protein, lactose, total solids and solids-not-fat) were, however, higher for the 75% Syrian crosses compared to the other crosses as well as to the pure Awassi sheep, except for lactation protein yield. The performances of Turkish Awassi were not superior to those of the Syrian genotype for all the traits considered under the environmental conditions of Syria. It is concluded that the Turkish Awassi should not be used as an improver breed for the Syrian genotype. The performance of the ICARDA maintained Awassi flock has on average been better compared to those of other farms in the region. Improved rams produced from the breeding program could therefore serve as improver for flocks maintained in countries of the region, necessitating the development of appropriate delivery systems of improved genetics.