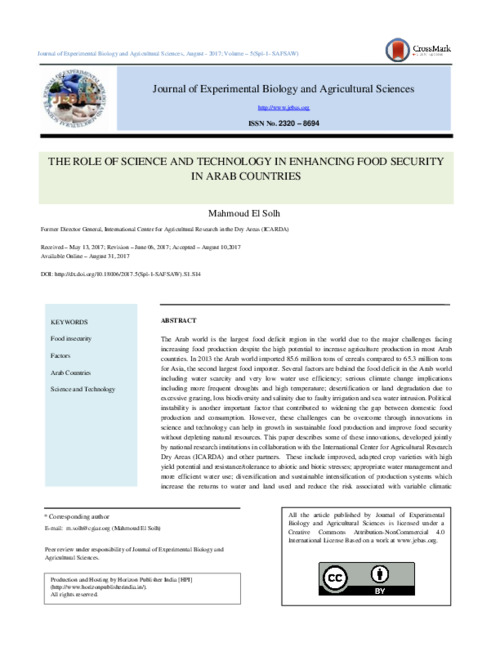 The Arab world is the largest food deficit region in the world due to the major challenges facing increasing food production despite the high potential to increase agriculture production in most Arab countries. In 2013 the Arab world imported 85.6 million tons of cereals compared to 65.3 million tons for Asia, the second largest food importer. Several factors are behind the food deficit in the Arab world including water scarcity and very low water use efficiency; serious climate change implications including more frequent droughts and high temperature; desertification or land degradation due to excessive grazing, loss biodiversity and salinity due to faulty irrigation and sea water intrusion. Political instability is another important factor that contributed to widening the gap between domestic food production and consumption. However, these challenges can be overcome through innovations in science and technology can help in growth in sustainable food production and improve food security without depleting natural resources. This paper describes some of these innovations, developed jointly by national research institutions in collaboration with the International Center for Agricultural Research Dry Areas (ICARDA) and other partners. These include improved, adapted crop varieties with high yield potential and resistance/tolerance to abiotic and biotic stresses; appropriate water management and more efficient water use; diversification and sustainable intensification of production systems which increase the returns to water and land used and reduce the risk associated with variable climatic environments. The paper provides on the ground examples in several Arab countries on bridging the yield gap between farmers yield levels of wheat and the levels of improved wheat production levels following improved varieties and agronomic practices. In an average of six seasons (2010/2011-2015/2016) involving whole provinces in nine Arab countries, wheat productivity yield gap was increased up to 124% under irrigated conditions in Sudan, up to 96% under supplemental irrigation in Yemen and up to 84% under rainfed conditions in Syria. Increasing wheat productivity and production contributes to enhancing food security in Arab countries.