Phenotypic, Genomic and Physiological Basis of Fecundity Traits in Bonga Sheep of Ethiopia 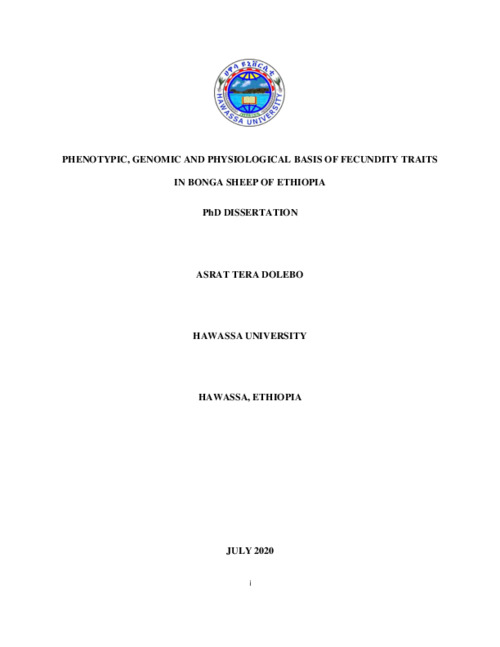 Three interrelated investigations were carried out with the objectives of estimating genetic parameters and trends of selection for Age at First Lambing (AFL), Lambing Interval (LI) and Litter size (LS); understanding the ovarian and endocrine changes and identifying the genetic basis of prolificacy in Bonga sheep, Ethiopia. Ten years data (2009-2018) on reproductive performance of Bonga sheep, managed by two communities involved in a community-based breeding program were used for genetic parameter and trend analysis. Data on the reproductive traits were analysed to evaluate the effects of breeding communities, season of mating, year of lambing, and parity by fitting fixed effect model of GLM procedures of SAS. Restricted maximum likelihood procedure of WOMBAT fitting univariate animal model was employed to estimate heritability, repeatability and breeding values. Thirty-one ewes were selected based on LS records and divided into two groups of high prolificacy (n=20) with LS ≥ 2 and low prolificacy (n=11) with LS =1. At a synchronized oestrus, follicular dynamics were determined using transrectal ultrasonography while plasma oestradiol concentrations were monitored throughout the induced follicular phase. Whole blood was collected from 95 animals (31 gave birth to single lambs, 33 to twins, 30 to triplets and one to a quadruplet) for genome analysis. Candidate regions under selection were identified using selection signature analysis performed on Ovine HD BeadChip data. Results showed that Bonga sheep had overall mean AFL, LI and LS of 453 days, 254 days and 1.43 lambs, respectively. Estimates of heritability for AFL, LI and LS were 0.015, 0.009 and 0.085, respectively. The repeatability estimates for LI and LS were low (0.109 and 0.196, respectively) indicating that environmental factors had contributed to the variation in these traits among parities. The genetic trends for AFL, LI and LS over the years were significant (p<0.01). Investigation of ovarian basis for prolificacy of Bonga sheep indicated that the mean number of large follicles was higher (p < 0.05) in HP (high prolific), 1.78 than in LP (low prolific), 1.0 ewes at day of oestrus (day 0). Prior to oestrus, more (p < 0.05) medium follicles were visible for HP compared to LP ewes. Plasma oestradiol concentrations were higher in HP compared to LP ewes (18.9 vs. 14.5 pg/ml; p < 0.05). Similarly, ovulation number was higher for HP than LP ewes (2.3 versus 1.28; p < 0.05) indicating that higher ovulation rates and litter size in Bonga sheep are evidenced by the previous presence of more large follicles and the existence of co-dominance effects. Analysis of selection signature revealed one strong selection signature on a candidate region on chromosome X spanning BMP15, suggesting this to be the primary candidate prolificacy gene in the breed. Besides, the analysis also identified several candidate regions spanning genes not reported before in prolific sheep but underlying fertility, immunity and reproduction in other species. The genes associated with female reproduction traits included SPOCK1 (age at first xiv oestrus), GPR173 (mediator of ovarian cyclicity), HB-EGF (signalling early pregnancy success) and, SMARCAL1 and HMGN3a (regulate gene expression during embryogenesis). The genes involved in male reproduction were FOXJ1 (sperm function and successful fertilization) and NME5 (spermatogenesis). It has been also observed that genes such as PKD2L2, MAGED1 and KDM3B within the candidate regions, which might have been associated with diverse fertility traits in males and females of other species. The results further confirmed the complexity of the genetic mechanisms underlying reproduction while suggesting that prolificacy in the Bonga sheep and possibly African indigenous sheep is partly under the control of BMP15 while other genes that enhance male and female fertility are essential for reproduction fitness. It is concluded that the well-structured community-based breeding programs of Bonga sheep have resulted in measurable genetic gains for reproductive traits. Besides, the existence of mutation is the causative effect for the phenotypic observed differences in growth of follicles and variability in litter size in Bonga sheep.