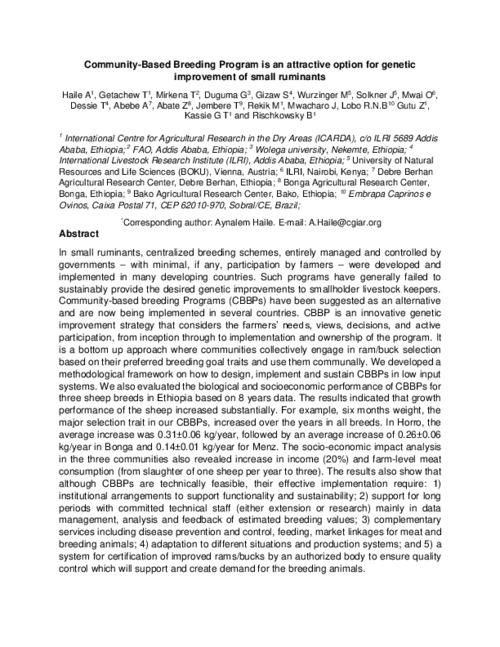 In small ruminants, centralized breeding schemes, entirely managed and controlled by governments – with minimal, if any, participation by farmers – were developed and implemented in many developing countries. Such programs have generally failed to sustainably provide the desired genetic improvements to smallholder livestock keepers. Community-based breeding Programs (CBBPs) have been suggested as an alternative and are now being implemented in several countries. CBBP is an innovative genetic improvement strategy that considers the farmers’ needs, views, decisions, and active participation, from inception through to implementation and ownership of the program. It is a bottom up approach where communities collectively engage in ram/buck selection based on their preferred breeding goal traits and use them communally. We developed a methodological framework on how to design, implement and sustain CBBPs in low input systems. We also evaluated the biological and socioeconomic performance of CBBPs for three sheep breeds in Ethiopia based on 8 years data. The results indicated that growth performance of the sheep increased substantially. For example, six months weight, the major selection trait in our CBBPs, increased over the years in all breeds. In Horro, the average increase was 0.31±0.06 kg/year, followed by an average increase of 0.26±0.06 kg/year in Bonga and 0.14±0.01 kg/year for Menz. The socio-economic impact analysis in the three communities also revealed increase in income (20%) and farm-level meat consumption (from slaughter of one sheep per year to three). The results also show that although CBBPs are technically feasible, their effective implementation require: 1) institutional arrangements to support functionality and sustainability; 2) support for long periods with committed technical staff (either extension or research) mainly in data management, analysis and feedback of estimated breeding values; 3) complementary services including disease prevention and control, feeding, market linkages for meat and breeding animals; 4) adaptation to different situations and production systems; and 5) a system for certification of improved rams/bucks by an authorized body to ensure quality control which will support and create demand for the breeding animals.