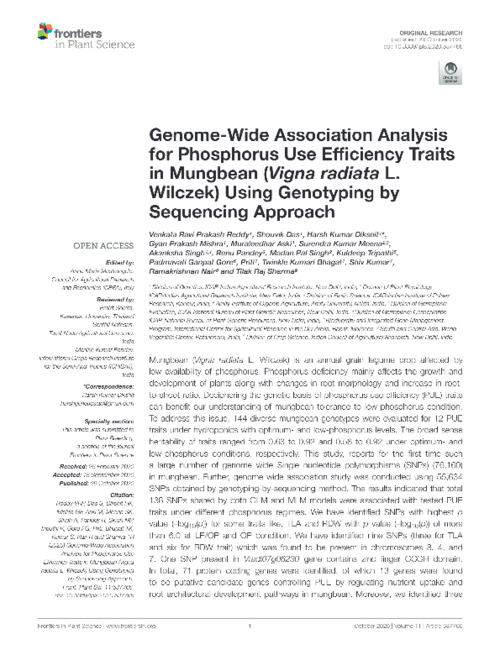 Mungbean (Vigna radiata L. Wilczek) is an annual grain legume crop affected by low availability of phosphorus. Phosphorus deficiency mainly affects the growth and development of plants along with changes in root morphology and increase in root-to-shoot ratio. Deciphering the genetic basis of phosphorus use efficiency (PUE) traits can benefit our understanding of mungbean tolerance to low-phosphorus condition. To address this issue, 144 diverse mungbean genotypes were evaluated for 12 PUE traits under hydroponics with optimum- and low-phosphorus levels. The broad sense heritability of traits ranged from 0.63 to 0.92 and 0.58 to 0.92 under optimum- and low-phosphorus conditions, respectively. This study, reports for the first time such a large number of genome wide Single nucleotide polymorphisms (SNPs) (76,160) in mungbean. Further, genome wide association study was conducted using 55,634 SNPs obtained by genotyping-by-sequencing method. The results indicated that total 136 SNPs shared by both GLM and MLM models were associated with tested PUE traits under different phosphorus regimes. We have identified SNPs with highest p value (–log10(p)) for some traits like, TLA and RDW with p value (–log10(p)) of more than 6.0 at LP/OP and OP condition. We have identified nine SNPs (three for TLA and six for RDW trait) which was found to be present in chromosomes 8, 4, and 7. One SNP present in Vradi07g06230 gene contains zinc finger CCCH domain. In total, 71 protein coding genes were identified, of which 13 genes were found to be putative candidate genes controlling PUE by regulating nutrient uptake and root architectural development pathways in mungbean. Moreover, we identified three potential candidate genes VRADI11G08340, VRADI01G05520, and VRADI04G10750 with missense SNPs in coding sequence region, which results in significant variation in protein structure at tertiary level. The identified SNPs and candidate genes provide the essential information for genetic studies and marker-assisted breeding program for improving low-phosphorus tolerance in mungbean.