Comprehensive analysis of the gene expression profile of wheat at the crossroads of heat, drought and combined stress 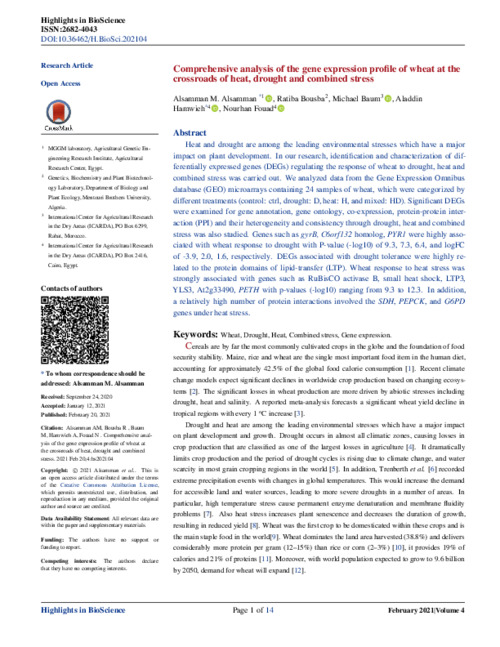 Heat and drought are among the leading environmental stresses which have a major impact on plant development. In our research, identification and characterization of differentially expressed genes (DEGs) regulating the response of wheat to drought, heat and combined stress was carried out. We analyzed data from the Gene Expression Omnibus database (GEO) microarrays containing 24 samples of wheat, which were categorized by different treatments (control: ctrl, drought: D, heat: H, and mixed: HD). Significant DEGs were examined for gene annotation, gene ontology, co-expression, protein-protein interaction (PPI) and their heterogeneity and consistency through drought, heat and combined stress was also studied. Genes such as gyrB, C6orf132 homolog, PYR1 were highly associated with wheat response to drought with P-value (-log10) of 9.3, 7.3, 6.4, and logFC of -3.9, 2.0, 1.6, respectively. DEGs associated with drought tolerance were highly related to the protein domains of lipid-transfer (LTP). Wheat response to heat stress was strongly associated with genes such as RuBisCO activase B, small heat shock, LTP3, YLS3, At2g33490, PETH with p-values (-log10) ranging from 9.3 to 12.3. In addition, a relatively high number of protein interactions involved the SDH, PEPCK, and G6PD genes under heat stress.