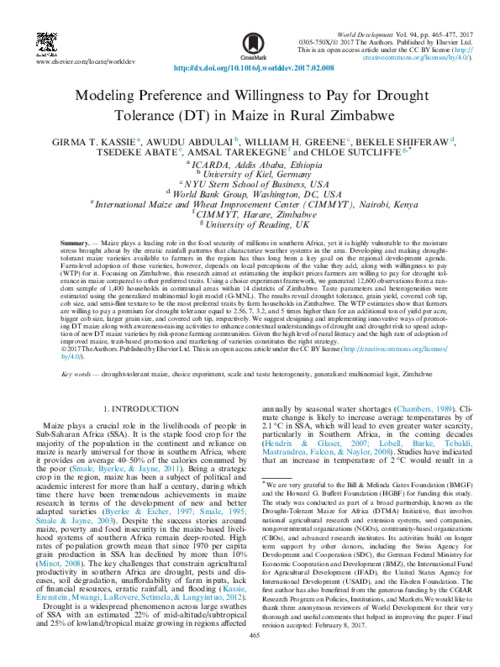 Maize plays a leading role in the food security of millions in southern Africa, yet it is highly vulnerable to the moisture stress brought about by the erratic rainfall patterns that characterize weather systems in the area. Developing and making drought tolerant maize varieties available to farmers in the region has thus long been a key goal on the regional development agenda. Farm-level adoption of these varieties, however, depends on local perceptions of the value they add, along with willingness to pay (WTP) for it. Focusing on Zimbabwe, this research aimed at estimating the implicit prices farmers are willing to pay for drought tolerance in maize compared to other preferred traits. Using a choice experiment framework, we generated 12,600 observations from a random sample of 1,400 households in communal areas within 14 districts of Zimbabwe. Taste parameters and heterogeneities were estimated using the generalized multinomial logit model (G-MNL). The results reveal drought tolerance, grain yield, covered cob tip, cob size, and semi-flint texture to be the most preferred traits by farm households in Zimbabwe. The WTP estimates show that farmers are willing to pay a premium for drought tolerance equal to 2.56, 7, 3.2, and 5 times higher than for an additional ton of yield per acre, bigger cob size, larger grain size, and covered cob tip, respectively. We suggest designing and implementing innovative ways of promoting DT maize along with awareness-raising activities to enhance contextual understandings of drought and drought risk to speed adoption of new DT maize varieties by risk-prone farming communities. Given the high level of rural literacy and the high rate of adoption of improved maize, trait-based promotion and marketing of varieties constitutes the right strategy. (C) 2017 The Author(s). Published by Elsevier Ltd. This is an open access article under the CC BY-NC-ND license (http://creativecommons.org/licenses/by-nc-nd/4.0/).