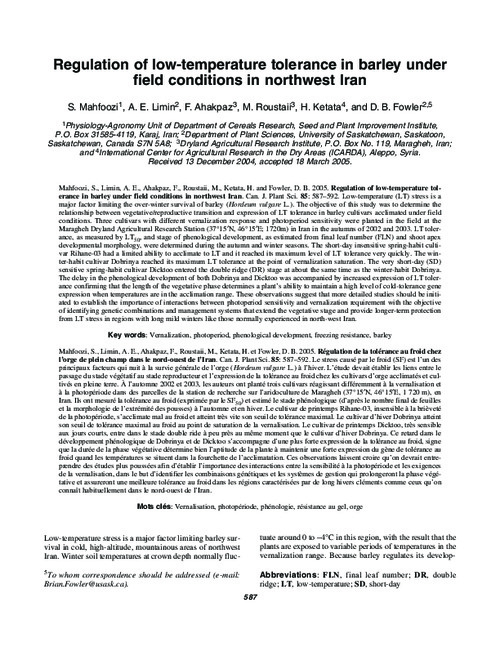 Low-temperature (LT) stress is a major factor limiting the over-winter survival of barley (Hordeum vulgare L.). The objective of this study was to determine the relationship between vegetative/reproductive transition and expression of LT tolerance in barley cultivars acclimated under field conditions. Three cultivars with different vernalization response and photoperiod sensitivity were planted in the field at the Maragheh Dryland Agricultural Research Station (37°15′N, 46°15′E; 1720m) in Iran in the autumns of 2002 and 2003. LT tolerance, as measured by LT50, and stage of phenological development, as estimated from final leaf number (FLN) and shoot apex developmental morphology, were determined during the autumn and winter seasons. The short-day insensitive spring-habit cultivar Rihane-03 had a limited ability to acclimate to LT and it reached its maximum level of LT tolerance very quickly. The winter-habit cultivar Dobrinya reached its maximum LT tolerance at the point of vernalization saturation. The very short-day (SD) sensitive spring-habit cultivar Dicktoo entered the double ridge (DR) stage at about the same time as the winter-habit Dobrinya. The delay in the phenological development of both Dobrinya and Dicktoo was accompanied by increased expression of LT tolerance confirming that the length of the vegetative phase determines a plant’s ability to maintain a high level of cold-tolerance gene expression when temperatures are in the acclimation range. These observations suggest that more detailed studies should be initiated to establish the importance of interactions between photoperiod sensitivity and vernalization requirement with the objective of identifying genetic combinations and management systems that extend the vegetative stage and provide longer-term protection from LT stress in regions with long mild winters like those normally experienced in north-west Iran