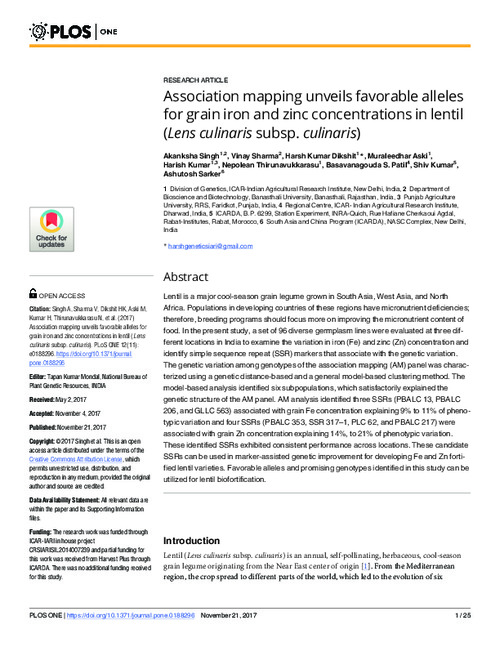 Lentil is a major cool-season grain legume grown in South Asia, West Asia, and North Africa. Populations in developing countries of these regions have micronutrient deficiencies; therefore, breeding programs should focus more on improving the micronutrient content of food. In the present study, a set of 96 diverse germplasm lines were evaluated at three different locations in India to examine the variation in iron (Fe) and zinc (Zn) concentration and identify simple sequence repeat (SSR) markers that associate with the genetic variation. The genetic variation among genotypes of the association mapping (AM) panel was characterized using a genetic distance-based and a general model-based clustering method. The model-based analysis identified six subpopulations, which satisfactorily explained the genetic structure of the AM panel. AM analysis identified three SSRs (PBALC 13, PBALC 206, and GLLC 563) associated with grain Fe concentration explaining 9% to 11% of phenotypic variation and four SSRs (PBALC 353, SSR 317-1, PLC 62, and PBALC 217) were associated with grain Zn concentration explaining 14%, to 21% of phenotypic variation. These identified SSRs exhibited consistent performance across locations. These candidate SSRs can be used in marker-assisted genetic improvement for developing Fe and Zn fortified lentil varieties. Favorable alleles and promising genotypes identified in this study can be utilized for lentil biofortification.