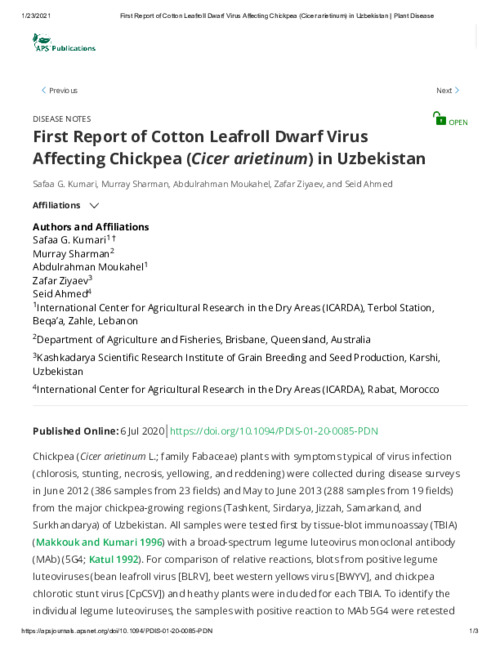 Chickpea (Cicer arietinum L.; family Fabaceae) plants with symptoms typical of virus infection (chlorosis, stunting, necrosis, yellowing, and reddening) were collected during disease surveys in June 2012 (386 samples from 23 fields) and May to June 2013 (288 samples from 19 fields) from the major chickpea-growing regions (Tashkent, Sirdarya, Jizzah, Samarkand, and Surkhandarya) of Uzbekistan. All samples were tested first by tissue-blot immunoassay (TBIA) (Makkouk and Kumari 1996) with a broad-spectrum legume luteovirus monoclonal antibody (MAb) (5G4; Katul 1992). For comparison of relative reactions, blots from positive legume luteoviruses (bean leafroll virus [BLRV], beet western yellows virus [BWYV], and chickpea chlorotic stunt virus [CpCSV]) and heathy plants were included for each TBIA. To identify the individual legume luteoviruses, the samples with positive reaction to MAb 5G4 were retested further using specific MAbs to BWYV (A5977 from Agdia, U.S.A.), BLRV (4B10; Katul 1992), a mixture of three MAbs (1-1G5, 1-3H4, and 1-4B12) to an Ethiopian isolate of CpCSV, and a mixture of three MAbs (5-2B8, 5-3D5, and 5-5B8) to a Syrian isolate of CpCSV (Abraham et al. 2009). Total RNA was extracted from 35 chickpea samples that showed positive reaction to 5G4 MAb only, or to 5G4 and other MAbs. Reverse transcription-polymerase chain reaction (RT-PCR) was performed using polerovirus group-specific primers AS3 (5′-CACGCGTCIACCTATTTIGGRTTITG-3′) (Abraham et al. 2008) and Pol3870F (5′-ATCACBTTCGGGCCGWSTYTWTCAGA-3′), as described by Sharman et al. (2015), except with the use of MyTaq Red DNA Polymerase (Bioline, U.K.). RT-PCR amplicons of the partial coat protein gene of the expected size (376 bp) were directly sequenced. Four out of 35 tested samples had 96 to 97% nucleotide (nt) sequence identity with the Brazilian (GQ401140 and KP176644) and Argentinean (KF359947) isolates of cotton leafroll dwarf virus (CLRDV, genus Polerovirus, family Luteoviridae). To confirm CLRDV infection in these chickpea samples, they were tested by RT-PCR using CLRDV-specific primer CLRDV3675F (5′-CCACGTAGRCGCAACAGGCGT-3′) and Pol3982R (5′-CGAGGCCTCGGAGATGAACT-3′) (Sharman et al. 2015). Amplicons of the expected size (310 bp) were obtained from all four samples and were sequenced in both directions. These four samples (UzCp137-13, UzCp148-13, UzCp149-13, and UzCp154-13) were collected in 2013 from one field in the Surkhandarya region, and their nucleotide sequences were deposited in GenBank under accession numbers MK461134, MK461135, MK461136, and MK461137, respectively. After removal of primers, the resulting consensus sequences were 268 nucleotides in length and shared greater than 99% nt identity among them, and as such further analysis was done for sample UzCp137-13, for which the closest match by BLAST was 98% nt identity to a CLRDV isolate from Argentina (KF359947). To our knowledge, this is the first report of CLRDV in chickpea from Uzbekistan. Mukherjee et al. (2016) studied the genetic similarity between CLRDV and chickpea stunt disease associated virus (CpSDaV) in India and found the coat protein gene sequences of both viruses to be almost identical (89.4 to 100% depending on the virus isolates), suggesting that CpSDaV is likely a strain of CLRDV. Chickpea stunt is a major disease of chickpeas in India, and thus CLRDV will be of huge concern to both chickpea and cotton production in Uzbekistan.