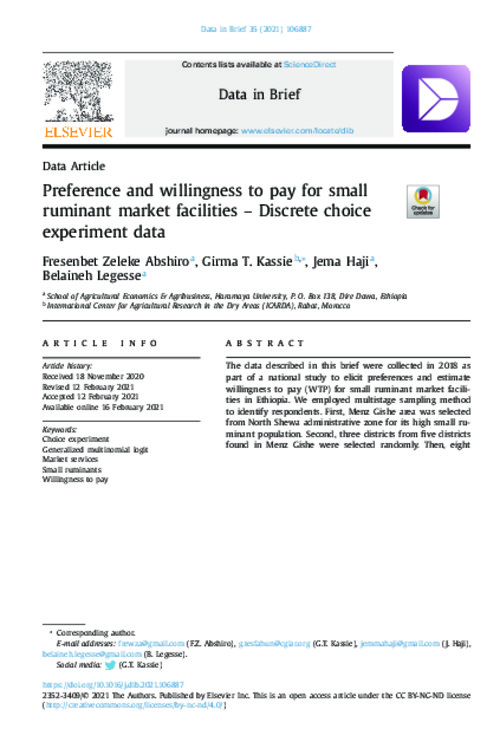 The data described in this brief were collected in 2018 as part of a national study to elicit preferences and estimate willingness to pay (WTP) for small ruminant market facilities in Ethiopia. We employed multistage sampling method to identify respondents. First, Menz Gishe area was selected from North Shewa administrative zone for its high small ruminant population. Second, three districts from five districts found in Menz Gishe were selected randomly. Then, eight Kebeles1 from fifty one Kebeles were selected randomly. Finally, 360 farmers were randomly selected proportional to the total number of farm households in each Kebele. We used discrete choice experiments to elicit preferences from the 360 respondents across the three districts whereby we presented 12 choice situations to each of them and hence generated 4320 observations. Generalized multinomial logit model (GMNL) and latent class model were used to investigate preferences for the market and heterogeneities around them. We also estimated the GMNL in WTP space to estimate the WTP values for the facilities. The dataset complements an original article entitled “Preference and Willingness to Pay for Small Ruminant Market Facilities in the Central Highlands of Ethiopia”2 and will be useful in replicating results for academic purposes and or employing the data for further development of choice behavior models.