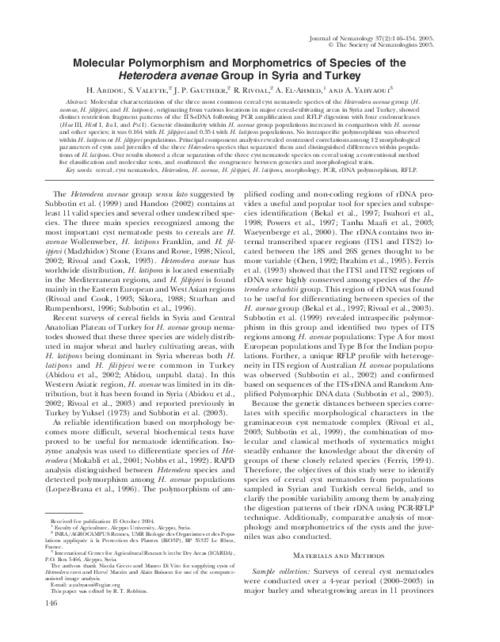 Molecular characterization of the three most common cereal cyst nematode species of the Heterodera avenae group (H. avenae, H. filipjevi, and H. latipons), originating from various locations in major cereal-cultivating areas in Syria and Turkey, showed distinct restriction fragment patterns of the ITS-rDNA following PCR amplification and RFLP digestion with four endonucleases (Hae III, Hinf I, Ita I, and Pst I). Genetic dissimilarity within H. avenae group populations increased in comparison with H. avenae and other species; it was 0.164 with H. filipjevi and 0.354 with H. latipons populations. No intraspecific polymorphism was observed within H. latipons or H. filipjevi populations. Principal component analysis revealed contrasted correlations among 12 morphological parameters of cysts and juveniles of the three Heterodera species that separated them and distinguished differences within populations of H. latipons. Our results showed a clear separation of the three cyst nematode species on cereal using a conventional method for classification and molecular tests, and confirmed the congruence between genetics and morphological traits.