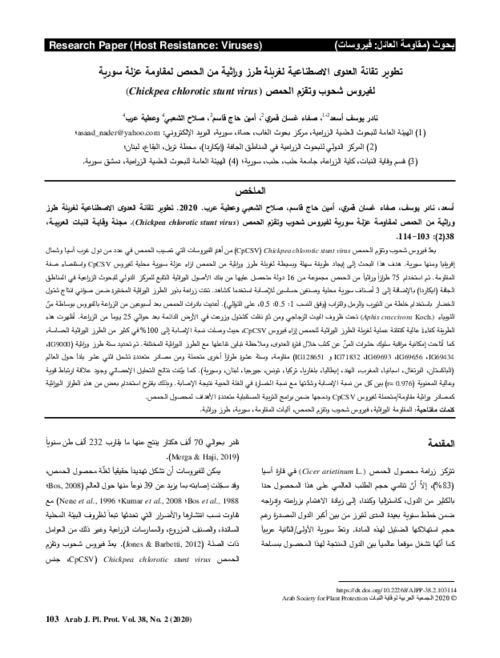 Chickpea chlorotic stunt virus (CpCSV) is the most important virus affecting chickpea crop in several countries of West Asia and North Africa (WANA), including Syria. The main objective of this study was to develop a simple and economical technique to screen chickpea genotypes for virus resistance under open filed conditions. A total of 75 chickpea genotypes originated from 16 countries (obtained from the Gene Bank of ICARDA), including 3 local and 2 susceptible varieties, were used in this study. Thirty seeds of each genotype were sown in seedling tray plates containing a mixture of peat moss, sand and soil (1:0.5: 0.5). Two weeks later, seedlings were inoculated with a Syrian isolate of CpCSV using the aphid virus vector Aphis craccivora Koch under green house conditions. Twenty-five days after sowing, seedlings were transplanted into the field. Results showed that the method used showed high infection efficiency and can be used as a practical technique to screen chickpea genotypes for CpCSV resistance, as the virus infection rate reached 100% in many susceptible chickpea genotypes, which permitted to closely monitor the behavior of aphids during the inoculation process, and observe the variation of the interaction of the aphid vector with different chickpea genotypes. Six resistant (IG9000, IG69434, IG69656, IG69693, IG71832, IG128651) and 16 tolerant genotypes from different origins (Pakistan, Portugal, Spain, Morocco, India, Italy, Bulgaria, Turkey, Tunisia, Georgia, Lebanon and Syria) were identified. Highly and significant corolation (r = 0.976) was recoded between both virus infection rate (%) and disease severity with grain yield loss (%). Resistant genotypes identified can be used as a source of CpCSV resistance in chickpea breeding programs.