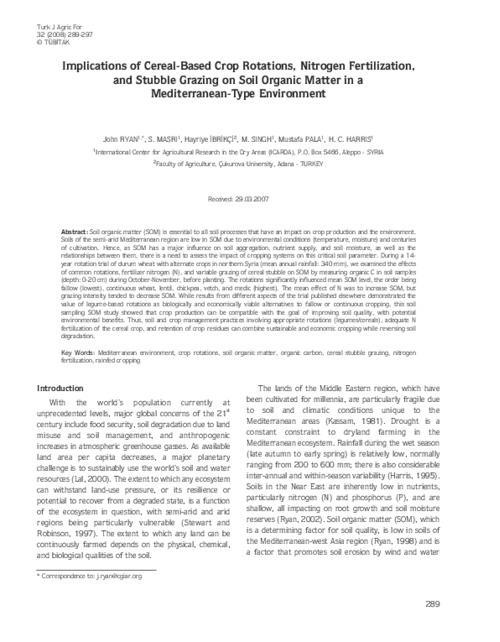 Soil organic matter (SOM) is essential to all soil processes that have an impact on crop production and the environment. Soils of the semi-arid Mediterranean region are low in SOM due to environmental conditions (temperature, moisture) and centuries of cultivation. Hence, as SOM has a major influence on soil aggregation, nutrient supply, and soil moisture, as well as the relationships between them, there is a need to assess the impact of cropping systems on this critical soil parameter. During a 14-year rotation trial of durum wheat with alternate crops in northern Syria (mean annual rainfall: 340 mm), we examined the effects of common rotations, fertilizer nitrogen (N), and variable grazing of cereal stubble on SOM by measuring organic C in soil samples (depth: 0-20 cm) during October-November, before planting. The rotations significantly influenced mean SOM level, the order being fallow (lowest), continuous wheat, lentil, chickpea, vetch, and medic (highest). The mean effect of N was to increase SOM, but grazing intensity tended to decrease SOM. While results from different aspects of the trial published elsewhere demonstrated the value of legume-based rotations as biologically and economically viable alternatives to fallow or continuous cropping, this soil sampling SOM study showed that crop production can be compatible with the goal of improving soil quality, with potential environmental benefits. Thus, soil and crop management practices involving appropriate rotations (legumes/cereals), adequate N fertilization of the cereal crop, and retention of crop residues can combine sustainable and economic cropping while reversing soil degradation.