A perspective on balanced fertilization in the Mediterranean region 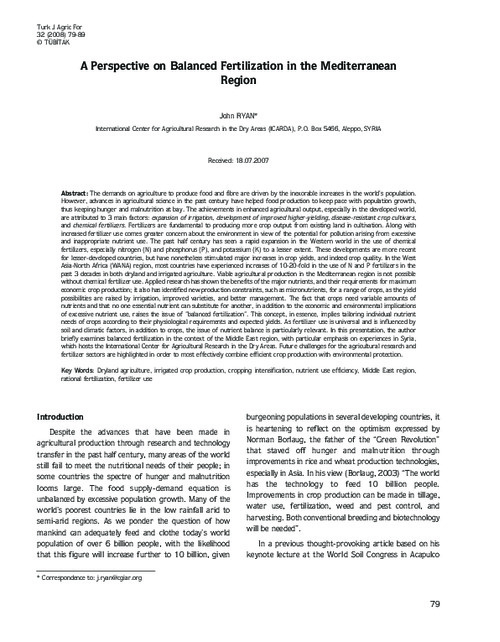 John Ryan. (1/1/2008). A perspective on balanced fertilization in the Mediterranean region. TURKISH JOURNAL OF AGRICULTURE AND FORESTRY, 32, pp. 78-79.

The demands on agriculture to produce food and fibre are driven by the inexorable increases in the world's population. However, advances in agricultural science in the past century have helped food production to keep pace with population growth, thus keeping hunger and malnutrition at bay. The achievements in enhanced agricultural output, especially in the developed world, are attributed to 3 main factors: expansion of irrigation, development of improved higher-yielding, disease-resistant crop cultivars, and chemical fertilizers. Fertilizers are fundamental to producing more crop output from existing land in cultivation. Along with increased fertilizer use comes greater concern about the environment in view of the potential for pollution arising from excessive and inappropriate nutrient use. The past half century has seen a rapid expansion in the Western world in the use of chemical fertilizers, especially nitrogen (N) and phosphorus (P), and potassium (K) to a lesser extent. These developments are more recent for lesser-developed countries, but have nonetheless stimulated major increases in crop yields, and indeed crop quality. In the West Asia-North Africa (WANA) region, most countries have experienced increases of 10-20-fold in the use of N and P fertilizers in the past 3 decades in both dryland and irrigated agriculture. Viable agricultural production in the Mediterranean region is not possible without chemical fertilizer use. Applied research has shown the benefits of the major nutrients, and their requirements for maximum economic crop production; it also has identified new production constraints, such as micronutrients, for a range of crops, as the yield possibilities are raised by irrigation, improved varieties, and better management. The fact that crops need variable amounts of nutrients and that no one essential nutrient can substitute for another, in addition to the economic and environmental implications of excessive nutrient use, raises the issue of balanced fertilization. This concept, in essence, implies tailoring individual nutrient needs of crops according to their physiological requirements and expected yields. As fertilizer use is universal and is influenced by soil and climatic factors, in addition to crops, the issue of nutrient balance is particularly relevant. In this presentation, the author briefly examines balanced fertilization in the context of the Middle East region, with particular emphasis on experiences in Syria, which hosts the International Center for Agricultural Research in the Dry Areas. Future challenges for the agricultural research and fertilizer sectors are highlighted in order to most effectively combine efficient crop production with environmental protection.