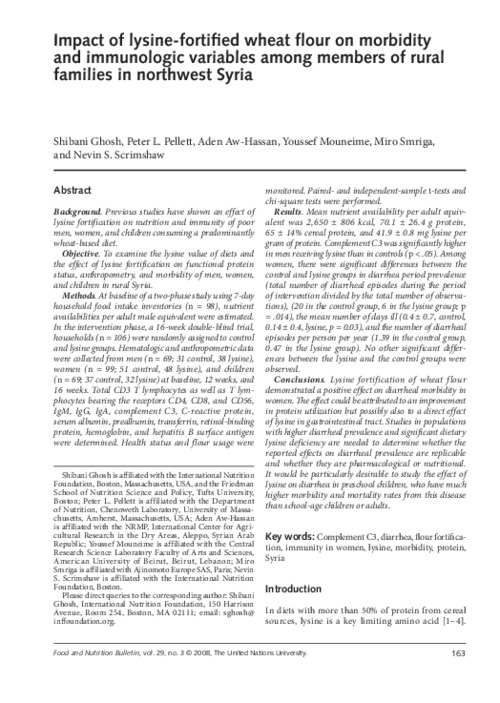 Background. Previous studies have shown an effect of lysine fortification on nutrition and immunity of poor men, women, and children consuming a predominantly wheat-based diet. Objective. To examine the lysine value of diets and the effect of lysine fortification on functional protein status, anthropometry, and morbidity of men, women, and children in rural Syria. Methods. At baseline of a two-phase study using 7-day household food intake inventories (n = 98), nutrient availabilities per adult male equivalent were estimated. In the intervention phase, a 16-week double-blind trial, households (n = 106) were randomly assigned to control and lysine groups. Hematologic and anthropometric data were collected from men (n = 69; 31 control, 38 lysine), women (n = 99; 51 control, 48 lysine), and children (n = 69; 37 control, 32 lysine) at baseline, 12 weeks, and 16 weeks. Total CD3 T lymphocytes as well as T lymphocytes bearing the receptors CD4, CD8, and CD56, IgM, IgG, IgA, complement C3, C-reactive protein, serum albumin, prealbumin, transferrin, retinol-binding protein, hemoglobin, and hepatitis B surface antigen were determined. Health status and flour usage were monitored. Paired- and independent-sample t-tests and chi-square tests were performed. Results. Mean nutrient availability per adult equivalent was 2,650 +/- 806 kcal, 70.1 +/- 26.4 g protein, 65 +/- 14% cereal protein, and 41.9 +/- 0.8 mg lysine per gram of protein. Complement C3 was significantly higher in men receiving lysine than in controls (p <.05). Among women, there were significant differences between the control and lysine groups in diarrhea period prevalence (total number of diarrheal episodes during the period of intervention divided by the total number of observations), (20 in the control group, 6 in the lysine group; p = .014), the mean number of days ill (0.4 +/- 0.7, control, 0.14 +/- 0.4, lysine, p = 0.03), and the number of diarrheal episodes per person per year (1.39 in the control group, 0.47 in the lysine group). No other significant differences between the lysine and the control groups were observed. Conclusions. Lysine fortification of wheat flour demonstrated a positive effect on diarrheal morbidity in women. The effect could be attributed to an improvement in protein utilization but possibly also to a direct effect of lysine in gastrointestinal tract. Studies in populations with higher diarrheal prevalence and significant dietary lysine deficiency are needed to determine whether the reported effects on diarrheal prevalence are replicable and whether they are pharmacological or nutritional. It would be particularly desirable to stud), the effect of lysine on diarrhea in preschool children, who have much higher morbidity and mortality rates from this disease than school-age children or adults.