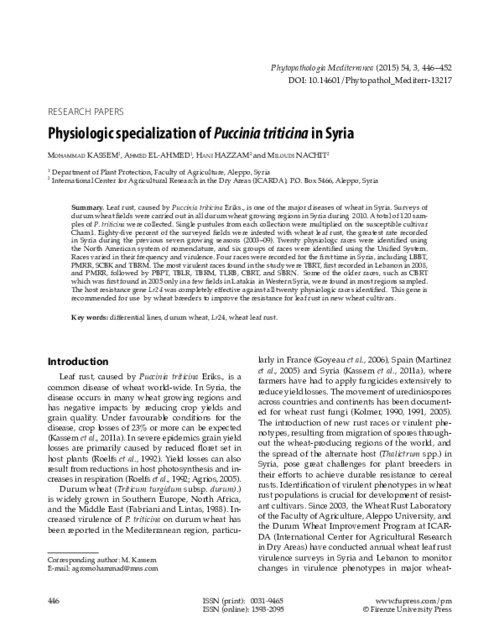 Leaf rust, caused by Puccinia triticina Eriks., is one of the major diseases of wheat in Syria. Surveys of durum wheat fields were carried out in all durum wheat growing regions in Syria during 2010. A total of 120 samples of P. triticina were collected. Single pustules from each collection were multiplied on the susceptible cultivar Cham1. Eighty-five percent of the surveyed fields were infested with wheat leaf rust, the greatest rate recorded in Syria during the previous seven growing seasons (2003-09). Twenty physiologc races were identified using the North American system of nomenclature, and six groups of races were identified using the Unified System. Races varied in their frequency and virulence. Four races were recorded for the first time in Syria, including LBBT, PMRR, SCBK and TBRM. The most virulent races found in the study were TBRT, first recorded in Lebanon in 2008, and PMRR, followed by PBPT, TBLR, TBRM, TLRB, CBRT, and SBRN. Some of the older races, such as CBRT which was first found in 2005 only in a few fields in Latakia in Western Syria, were found in most regions sampled. The host resistance gene Lr24 was completely effective against all twenty physiologic races identified. This gene is recommended for use by wheat breeders to improve the resistance for leaf rust in new wheat cultivars.