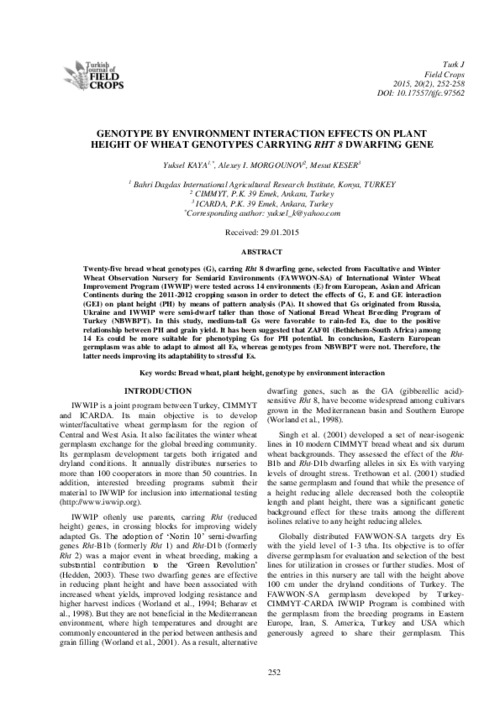 Twenty-five bread wheat genotypes (G), earring Rht 8 dwarfing gene, selected from Facultative and Winter Wheat Observation Nursery for Semiarid Environments (FAWWON-SA) of International Winter Wheat Improvement Program (IWWIP) were tested across 14 environments (E) from European, Asian and African Continents during the 2011-2012 cropping season in order to detect the effects of G, E and GE interaction (GEI) on plant height (PH) by means of pattern analysis (PA). It showed that Gs originated from Russia, Ukraine and IWWIP were semi-dwarf taller than those of National Bread Wheat Breeding Program of Turkey (NBWBPT). In this study, medium-tall Gs were favorable to rain-fed Es, due to the positive relationship between PH and grain yield. It has been suggested that ZAF01 (Bethlehem-South Africa) among 14 Es could be more suitable for phenotyping Gs for PH potential. In conclusion, Eastern European germplasm was able to adapt to almost all Es, whereas genotypes from NBWBPT were not. Therefore, the latter needs improving its adaptability to stressful Es.